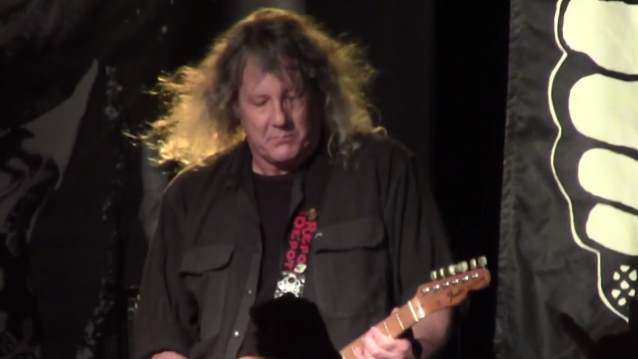 Joe Young, the guitarist and founding member of the Charlotte, North Carolina-based punk-rock band ANTISEEN, died on April 30 at the age of 54. The cause of death has not yet been disclosed.

Formed in 1983, ANTISEEN — which derived its name from a distortion of the phrase "anti-scene" — backed up now-legendary scumlord GG Allin on his first post-prison release "Murder Junkies" and also recorded with guitarist/songwriter for the original ALICE COOPER group, Michael Bruce. Live shows consisted of violent bursts of musical blitzkriegs and an unhealthy dose of pro wrestling influence that featured barbed wire wrapped baseball bats or crowns of barbwire that caused "real" bloodshed (another thing many have latched onto) and the occasional auto self-destruct finale that got them labeled "destructo rock" early in the group's history.

On September 20, 2008, ANTISEEN played its 25th-anniversary show in its hometown, which saw fans, friends and bands from all over the world coming in for the celebration. This marked the end of an era which had drummer Greg Clayton and bassist Doug Canipe saying goodbye after many years of dedication and service and hello to the new chapter of the band with their replacements, Phil Keller and John Bowman, respectively.

Michigan punk legends THE MEATMEN paid tribute to Young's musical contributions on their Facebook page: "To say [Young] created a signature sound 30 years ago would be an understatement. That buzz saw wall of grind trademark axe will forever be etched in the cranium of anyone who was a fan of ANTISEEN's countless platters and live shows."

Young ran for state house in 2000 and made a bid for a city council seat in 2001, both times as a Libertarian.