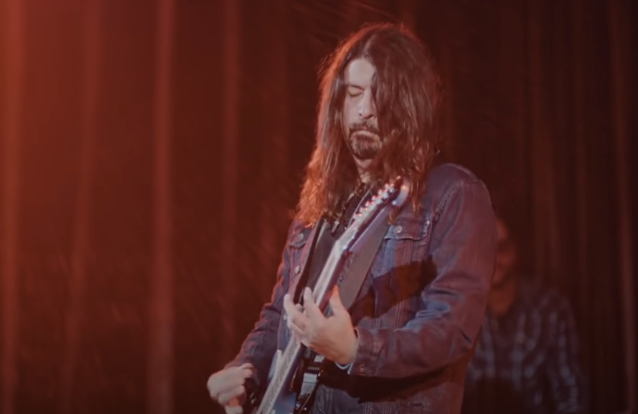 The Dave Grohl-fronted outfit performed at the Canyon Club on Tuesday (June 15) as a warm-up gig for FOO FIGHTERS' appearance at Madison Square Garden in New York City on June 20.

Fans wishing to attend last night's concert had to show photo ID as well as proof of vaccination in order to pick up their non-transferable tickets for the 21+ show.

According to Variety, former child star Ricky Schroder was one of the protesters outside the venue.

"Dave Grohl is an ignorant punk who needs slapped for supporting Discrimination," Schroder wrote in a Facebook post on Sunday, one day after the Canyon Club show was announced. "Ignorance comes in all shapes & sizes. Kurt Cobain is laughing at you Dave along with Millions of Patriots....Fool."

A few of the FOO FIGHTERS fans attending the concert posted about the protesters on social media. One user wrote, "some real low-quality humans at the @foofighters show in agoura hills CA tonight," while another said, "This is what happens when you just want to attend a @foofighters concert at a small local concert hall and the next thing out know you’re a ‘Vaccine Segregationist.'"

Schroder, known for his work in the movie "The Champ" and the television series "Silver Spoons", made headlines last month when he was videotaped confronting a Costco employee about mask wearing.

In 2020, Schroder drew criticism when he donated to help bail out Kyle Rittenhouse, the teenager accused of fatally shooting two people during a demonstration in Kenosha, Wisconsin.

Dave Grohl is an ignorant punk who needs slapped for supporting Discrimination. Ignorance comes in all shapes & sizes. Kurt Cobain is laughing at you Dave along with Millions of Patriots....Fool.

This is what happens when you just want to attend a @foofighters concert at a small local concert hall and the next thing out know you’re a “Vaccine Segregationist”. #FooFighters pic.twitter.com/fyDAZ2QcXn