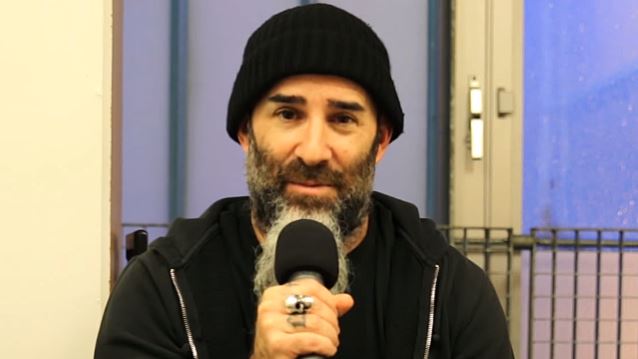 ANTHRAX guitarist Scott Ian said in a new interview that he finds it hard to believe that Donald Trump is running for the highest office in the U.S. Ian told Stay Tuned Interviews: "I look at it this way: if Donald Trump was to become president, then America would actually get what it deserves. It truly would."

According to Ian, Trump's chances of actually being elected president are slim. He said: "I don't think he will win. I don't even think he'll become the Republican candidate, because I think the Republicans are having a very hard time with him; they hate him too. And he's really making a mockery of the whole system, which I really enjoy. And I think it would be great if, at the end of this whole thing, he actually came out and said, 'You see, this was my whole point: to show everybody how stupid this whole system really is.' Because America does need… This whole party system is… it's fucking done. The Republicans are in the pocket of the hardcore right wing, Christian right, and that's it. Every soundbite by a Republican is just something that the Christian right wants to hear, and you can't win on that. But they also can't run unless they do that. There needs to be a third party now that has, let's say, more centrist values, or what the Republicans used to be — the moderate Republicans from the '70s and '80s — which actually made sense."

He continued: "The whole thing is insane, and I can't say I'm worried, because it's… Really, no matter who wins, nothing's gonna change anyway — whether it's Hillary Clinton or it's…I don't even know who the best candidate is for the Republicans; they're a bunch of fucking monkeys, as far as I'm concerned."

Although Ian plans to vote in the upcoming presidential election, he is not particularly inspired by any of the candidates that are running. "Nothing's gonna change regardless," he said. "Nothing will change. It doesn't matter who's there; nothing will change. The only one that has the balls to actually say anything is Bernie Sanders, and he's actually got the balls to call out the NRA, and he's got the balls to call out the corporations, and he's got the balls to call these things out. That's why he will never win. So I will vote for him — that's who I will vote for — because he's the only one that will actually point out things that are wrong in America and he's not bowing to the corporate fucking dollar or the NRA stronghold that America has become. So I will vote for Bernie Sanders. It's throwing my vote away, I guess, but at least in my heart I knew I voted for somebody that had the balls to say something different than the corporate line that even Hillary Clinton is a part of."

The ANTHRAX guitarist also said that he believes he would make an outstanding politician. He said: "I put myself out there, but nobody took me seriously. I think I'd make a good running mate. I could be a good vice president. I would pass all the tests, I think. I've never done drugs. I mean, just like Bill Clinton, I smoked weed a few times, but I'm allergic to it, so I can't smoke it anymore. For real, I am.

"I think I'd make a great vice president," he continued. "I'd bring in a whole new audience and voting demographic."