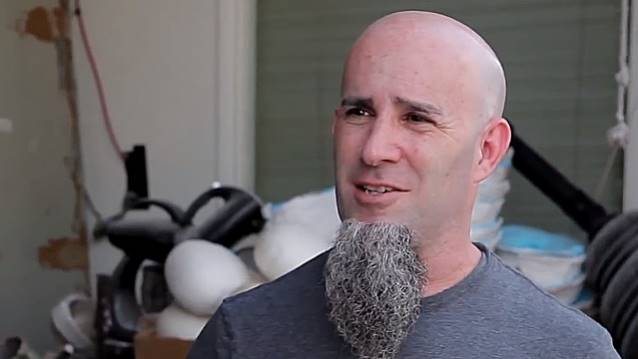 Elliot Levin of the NY Hard Rock Music Examiner recently conducted an interview with ANTHRAX guitarist Scott Ian. A couple of excerpts from the chat follow below.

NY Hard Rock Music Examiner: You've been touring as part of a band for over 30 years. Is it an adjustment to tour solo [as part of your "Speaking Words" spoken-word tour]?

Scott: Well, from a production standpoint, it's obviously much different, because I'm just out here by myself with a tour manager who also doubles as the merch guy and driving, and we're in a rent-a-car and we're driving out right after shows. So from that standpoint, yeah, it's a huge adjustment. I'm used to getting on a tour bus after the show and having a beer and going to sleep in my bunk. There's a level of comfort when I'm touring with the band. But at the same time, I embrace this. All the responsibility is on me, it's just me out here, and I enjoy that as well. The fact that I'm doing something that's outside of my bubble, and still outside of my comfort zone, and it's a new skill set for me and I love that I'm learning how to do this after all these years.

NY Hard Rock Music Examiner: I'm surprised that there's not much leaked video of your show on YouTube yet. Do you prefer it that way?

Scott: Yeah. That's because I take it down when people decide that they're going to put my content on YouTube for free. Call me crazy, but I'm one of those crazy artists that thinks you shouldn't give your content away for free. I know that's a crazy way to think these days but I come from the old school. Where you used to buy albums and videos. And I still do, I still buy my music and DVDs. So I feel like if I have enough respect to do that, then everyone should have enough respect to do that.

Scott: I think it's idiotic. I think the fact that someone would come to a show, spend the money to come to the show, and stand there holding their freakin' phone over their head for 90 minutes is pathetic. It completely defeats the purpose of coming to a live show. I think it's a joke. I've seen Bruce Dickinson [IRON MAIDEN] go off on audience members for doing that. Granted, he's in IRON MAIDEN and they're big enough to say that to their audience, but I think it's idiotic and I don't understand that mindset at all. You're standing at a live show and you're watching it through a screen on your phone.

NY Hard Rock Music Examiner: Do you think there's longevity in this spoken-word thing? Would you want to do it again?

Scott: My attitude towards this is, I'm having fun doing this and that's why I'm doing this. I'm at a point in my life where I'm not trying to leave home anymore. I'm not looking for reasons to travel. I get enough of that with my band. I just want to be home with my family. But this is something that I've really been enjoying, and I do want to keep doing, for sure. I've even talked to the band's agent about when ANTHRAX starts touring again later this year or next year, when we have a night off in a city, if I can try and get me a talk show when we're there.