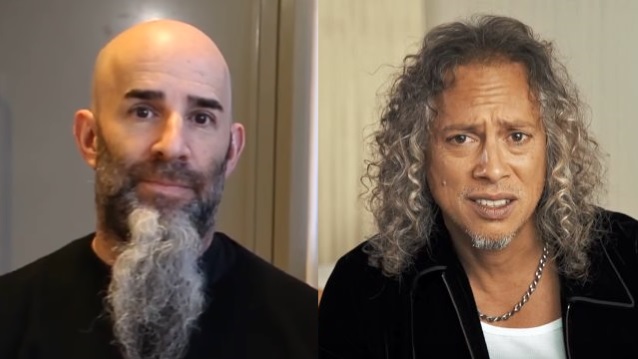 Sam Roberts and Dan Soder of SiriusXM's "Jim And Sam Show" recently conducted an interview with ANTHRAX guitarist Scott Ian about his second book, "Access All Areas: Stories From A Hard Rock Life". You can watch the full chat below. A few excerpts follow (transcribed by BLABBERMOUTH.NET).

On whether he documented significant life and career events as they happened in the event he would write a book:

Scott: "I remember shit. I never drank in the '80s, so the formative years of the band, like, if you really want to go back, on my 18th birthday, I got so drunk because it's, like, 'Woo-hoo! I'm legal to drink!' Because I'm that old and that was the drinking age back then, so I turned 18, not that I hadn't been drinking before that, but I drank so much crappy vodka on my 18th birthday, I had alcohol poisoning. Then I didn't drink again for years. Even when we started to blow up in the mid and late '80s, I wasn't straightedge by any means, but I chose not to drink because the smell of it turned my stomach for so long. It wasn't until the '90s that I even started with beer and wine. I'd be really good at nursing a couple of beers. Then in the early '90s into the mid-'90s, I actually started drinking. I was, like, 'Wow, this is really fun!' Even through all of that, I still have an amazing steel trap of a memory for stuff."

On breaking into METALLICA lead guitarist Kirk Hammett's home after an ANTHRAX show:

Scott: "There was one story in the book, it's called 'The Wrath Of Kirk' where myself and some of the other guys in ANTHRAX and some of the members of METALLICA, really late night in San Francisco one night after an ANTHRAX show, we had gone out to the strip clubs and the whole thing. It's now 2:30 in the morning and we were all pretty tanked and were looking for a way to play music and realized 'Kirk lives in the city.' He had already left. He had some personal issues to deal with at home, so we made the adult decision to break into his house without telling him. We decided 'Mark's [Osegueda] here,' Mark from this band called DEATH ANGEL. Mark knows where he keeps the key and we're going to break into his house and go into his studio downstairs and jam. It seemed like a really good idea. Three a.m., jamming drunken BLACK SABBATH in Kirk's basement, and he was not thrilled. I had known him for 10 years already at that point and had never seen him angry once. Kirk is easily the most kick-back dude you'll ever meet in your life and it all changed that night. [He] was more like the angry-then-disappointed dad. He was like one of my best friends and then he's just, like, 'I can't believe you would do this.' The story goes on and there's way more to it and there is a happy ending. There is a very expensive glass door that gets broken later in the story and that added to the misery, but yeah, that story, there were a lot of little details as I was trying to put that one back together. For some reason, I was, like, 'Who remembered how to get into this house and this and that?' There was a lot of texting back and forth. That's why at the end of the book, I thank some people for the where, when and why because there were little details that I'm like 'Who did this and who did that?' Between five or six of us, we were able to put it together."

On whether he's envious of METALLICA's success in spite of ANTHRAX's inclusion in the "Big Four" of thrash:

Scott: "Yeah, but in the way of like, you're just so happy for your bros, because I was there the day they showed up in New York City in the U-Haul truck with [original METALLICA lead guitarist/MEGADETH leader] Dave [Mustaine], he was still in the band. We had the same manager [Jon Zazula] and he was, like, 'Do you mind going down to the Music Building?' which was the shitty squat of a building in Jamaica, Queens in South Jamaica where bands could pay a couple hundred bucks and you could have a 24-by-7 [foot] room monthly. You could put all of your gear in there and literally have a place to crash when you needed to. That's where they were coming and that's where they were going to live as well. It's not like they had a hotel or something to come into. They were living in a squat in South Jamaica. He was like 'Do you mind going down there and greeting them?' I was the guy, it was me and Danny Lilker, the original bass player in ANTHRAX. We're, like, there to meet them and they were rolling in driving a U-Haul across the country. They load their gear in the room and they set up and they're, like, 'Okay, where are we staying?' I'm, like, 'Jonny didn't tell you? He didn't tell you? Maybe you ought to call Jonny.' They quickly found out they were living in the Music Building. It was, like, 'Oh my God.' [I said] 'We have a fridge in our room.' We gave them our refrigerator, our toaster oven, just anything to help. We were fast friends from that point on. By the late '80s in '88/'89, when they were already headlining arenas, this was pre-'Black Album' on '…And Justice For All', they were already big enough to headline arenas themselves, but it hadn't gotten to that 'Black Album', stadium level. Even at that point, we were always like 'We are only six months behind METALLICA.' We were doing great at that point in '87/'88. We were selling seven thousand tickets, we were doing great. No complaints. Two or three gold albums already, but then you see METALLICA get to: 'All right, now they're selling out arenas instead of theaters. And they've got a platinum record.' Because our manager back then always used to say 'You guys are always six months behind.' It was always kind of like that. That's how it was for years from '84, '85, '86, '87, '88, then '89 rolls around, they start selling out arenas. It's like 'All right, six months is up.' We did an arena in New York and in Los Angeles, but what about the rest? Then they hit the 'Black Album' and boom. It's not even 60 years behind. It's just not happening. It happened for one band and that's it. Us, MEGADETH, SLAYER, I'm here 36 years later still talking about my band, we still get to do whatever we want. There's no complaints. But only one band was going to go to those heights."