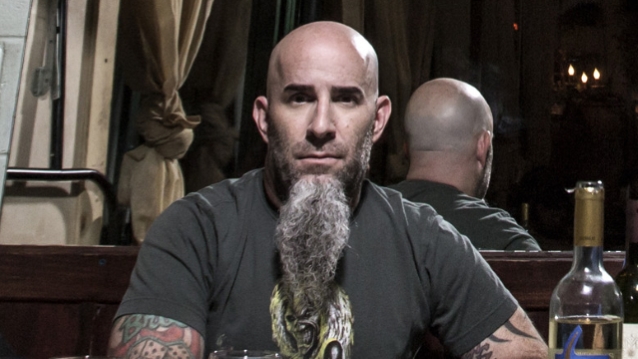 Keen Eye 4 Concerts recently conducted an interview with ANTHRAX guitarist Scott Ian about his upcoming "One Man Riot" spoken-word tour of Australia. You can now listen to the chat using the SoundCloud widget below.

Asked if there was one specific moment in his life that was especially influential and important for him, the 54-year-old musician said: "It's not so much that I can pinpoint a moment, but there was, let's say, a two-year span, a moment in time, from '85 to '87, where we were really part of a wave of bands — [with] METALLICA and SLAYER and MEGADETH and EXODUS, mainly — from America that, we had all made our first albums, our second albums, and we were all going on our third record by '87. So between '85 and '87, we were just a part of this wave that, by the time '87 rolled around, it had built up such an amount of power and fury, and when that wave crashed in '87, we were lucky enough to be a part of that. We went from being this small, underground thing, playing to four or five hundred people in clubs, and by the end of '87, we were playing to seven thousand, ten thousand people. So, yeah, that moment in time, where everything just kind of coalesced."

He continued: "They say timing is everything. And we were really in the right place at the right time. When we started as a band, and when our records were coming out, and with other like-minded bands, like the bands I mentioned, the world just kind of caught up to what we were doing. And we were there — we were a part of that.

The "One Man Riot" trek will kick off on September 24 and will include stops in Adelaide, Melbourne, Sydney, and Brisbane.

ANTHRAX's latest album, "For All Kings", was released in February 2016. Its arrival followed a five-year period during which the band experienced a rebirth of sorts, beginning with ANTHRAX's inclusion on the 2010 "Big Four" tour with METALLICA, SLAYER and MEGADETH, and continuing with the 2011 release of comeback LP "Worship Music".