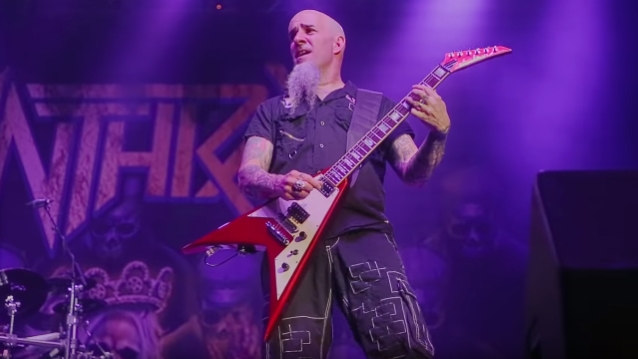 Sweetwater's Nick Bowcott recently joined ANTHRAX guitarist Scott Ian for an in-depth tour of his travel rig. Check out the video below.

In an interview with the "Sixx Sense" radio show, Ian stated about his early years as a guitar player: "I started playing guitar when I was 8, that was around '71-'72. So everything from the '70s for me was — I was just learning, learning, learning. I would sit at home with the records and just learn the chords. And that thing has a lot to do with why I stuck to rhythm and becoming a rhythm player. Some of it comes from laziness, because I just wanted to learn the songs. So when I would come home with an AC/DC record — I would learn all the chords, I would learn all the songs, but I couldn't be bothered to sit and — like some of my friends — slow the record down and learn Angus's solos. In the time it would take me to do that, I could learn a whole another album of songs. And I felt that's what the song is — it's the chords! I don't care about all that other noodly stuff! [Laughs]

"Rudy Schenker from the SCORPIONS was a big influence on me as well. Again, the guy who's strictly the rhythm guy, and he just had such a driving energy. Just the power of his chords. And of course, you see them live and he's like the lunatic on stage. And even for a guy like me in the '70s, Ted Nugent — people think of him as a lead player, but for me it was always about his groove. When you're 13 and you hear that riff, your boner is like, 'Oh my god! What is that?! I need more of that!'"

Scott continued: "For me, AC/DC was kind of like my guitar lessons. I took guitar lessons when I first started playing guitar, for a few months. And then I just didn't wanna take lessons. The teacher wanted me to learn theory and all this crap and it has started to turn into homework. I was just, like, 'Teach me how to play [LED] ZEPPELIN.' Now I wish I could read [music]...

"Once I got into [AC/DC], that was it. It kind of felt accessible to me, which in a weird way is good. People think AC/DC is simple. I will tell you it's wrong — it's the hardest thing in the world to do. If it was easy there would be 30 AC/DCs and there's only one. For me, they define rock 'n' roll.

"We started writing songs that needed a specific way, very right-hand palm-muted alternate picking, or the super fast down picking. I always call it a very fascist play of playing guitar — there's just no room for anything else. But I was somehow able to add Malcolm's percussiveness into what I've done, which I think in the early days kinda separated me from my contemporaries and other bands.

"I think the best compliment you could give to any band or musician is that you know who it is as soon as you hear it. I mean, you know Eddie [Van Halen] as soon as you hear him. I know James Hetfield's sound. Even though he had different sounds through the years, you just know what his right hand sounds like."