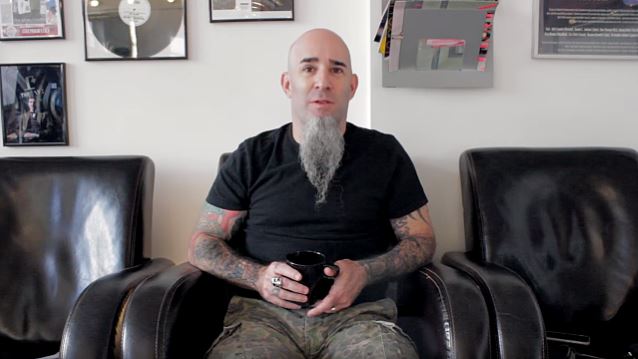 ANTHRAX guitarist Scott Ian says that he would "make all of the Internet go away" if he could because it would be "much better for the music business."

In a new interview clip released by ANTHRAX's European record label Nuclear Blast, Ian talks about the amazing commercial success of Adele's "25" album, which broke records many people long since ruled out as logistically impossible, most notably smashing N SYNC's 15-year-old record for most album sales in a week in just four days.

Ian said (see video below): "The Adele phenomena isn't, like, some great wake-up call for the record [labels]… Well, it is a wake-up call, in a sense, to show the companies that they shouldn't be so short-sighted and they're going for the quick kind of cash-in, I think, on this record. But there are people out there who will buy something quality."

He continued: "In a very, very small way, metal bands like us, IRON MAIDEN, SLAYER — bands that have been doing it for so long — AC/DC… and have built and maintained an audience, you can say, in a lot of ways, on a much smaller level, we have the same thing; we have our fans who will go out and buy our records. Granted, we don't have twenty million of 'em. But our fans are very loyal and very strong, and they want that physical product, and I think that's great. And that's why I would say, I wish, if there was that option to have the Internet go away, I just think the experience for everybody, when it comes to music, would be that much better, because the Internet has devalued music to where people think you can just have it for free, and it shouldn't be that way."

Ian added: "If I had the option to make all of the Internet go away — like, let's say if I could go like that [snaps fingers], and it's like it never existed and we never knew we had it — I would choose that, because it'd be much better for the music business."

In the past, Ian has been critical of music streaming services like Spotify and Pandora as a source of revenue for artists like ANTHRAX, telling From Hero To Zero in a 2015 interview: "Music doesn't have the same value in people's minds on this planet as it did ten years ago, twenty years ago… The commodity of music is worth less these days. Albums couldn't be cheaper. You could buy a brand new album, let's say on iTunes, you could buy a brand new CD for ten dollars. I mean, it wasn't that long ago where you had to go to, let's say, Virgin Megastore, which used to be everywhere. Albums back then in the States, a brand new CD would cost you at least seventeen dollars. That's not even including the gas to get there in your car, paying for parking sometimes. Now you could just sit at home and pay ten dollars. It's never been cheaper, and people still have a problem with that, apparently, because they'd rather steal it or stream it."

He went on to say: "Now, look, I get streaming — it's a modern convenience, it's the next step of where things are going, as far as how to get your music, and I don't have a problem with that. Look, I was one of the first people to get an iPod. I love iTunes, I love having all my shit right here in my phone; I love the convenience of that. I even like streaming, because it will turn me on to music that maybe I wouldn't have heard before and then I'll go and buy the record. But I just feel like, once again, bands are getting ripped off by these streaming services. If Spotify would pay more money to the bands for the art they're creating, I think just in general people would have a better view of music and think it was worth more. Music should be worth something. It is worth something. We're creating art, and these businesses have completely devalued what we do, and obviously I think that's bullshit."

According to music industry web site Hits Daily Double, ANTHRAX's new album, "For All Kings", is likely to sell between 20,000 and 23,000 copies in the United States in its first week of release. The SPS figure is expected to be between 21,000 and 24,000.

"For All Kings" was released on February 26 via Nuclear Blast in Europe and Megaforce in the U.S.