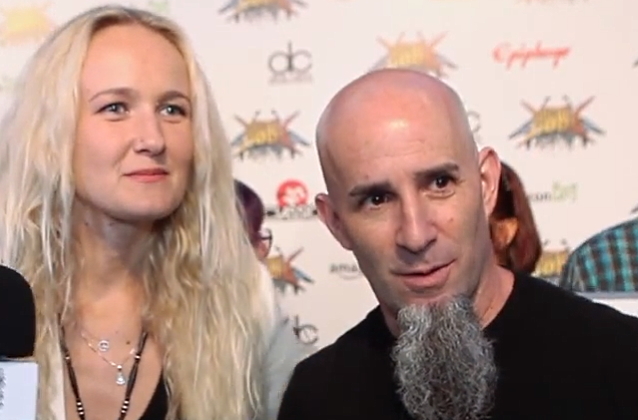 ANTHRAX guitarist Scott Ian and his wife, Pearl Aday, have taken to social media to profess their love for each other on their ninth wedding anniversary.

Earlier today, Pearl shared a photo of the couple's vow renewal from five years ago and included the following caption: "Twenty years ago we met and moved in together almost immediately. 9 years ago on January 15th we said 'I do' and I was ushered down the isle by the best/worst Elvis Presley in Las Vegas surrounded by our closest friends and family. That spring our Revel Star arrived. Five years ago we hiked up to the magic tree in the countryside behind our house and stood again in front of our closest friends and family and renewed our vows. You got on your knee and asked me to be with you forever again. I said yes. Our brother Corey [Taylor] officiated with all of the chosen family love in his big heart. Our three year old baby boy stood up and sang 'We all live in a yellow submarine!' We all cheered and drank bubbles, hiked back home and ate BBQ. HAPPY wedding anniversary @scottianthrax It only keeps getting better than it ever was, and it’s always been pretty damned amazing. You are my one. I am in love with you. I love you always. #happyanniversary @coreytaylor Photo by @elarsenimages #love #chosenfamily #iloveyou"

Scott shared Pearl's post and wrote: "Happy anniversary Pearl. I am dizzy in love with you."

Ian and Aday met in 1999 when ANTHRAX was out on the "Maximum Rock" summer package tour with MÖTLEY CRÜE, which featured Pearl as one of its back-up singers. Their son Revel Young Ian was born in June 2011.

The daughter of legendary crooner Meat Loaf, Aday was named after the infamous Janis Joplin and is the god daughter to Maria Muldaur. In addition, she and her band have opened for VELVET REVOLVER.

When asked what it's like having the iconic Meat Loaf as his father-in-law, Ian said in an interview, "It's like having anyone as your father-in-law. It's not like he's on stage when you're hanging out with the guy. We actually had dinner with him last night, and all we talked about was fantasy football. He's just a regular guy who happens to be a legendary rock star."

Happy anniversary Pearl. I am dizzy in love with you. ⚡️?⚡️
“Twenty years ago we met and moved in together almost...

Twenty years ago we met and moved in together almost immediately. 9 years ago on January 15th we said “I do” and I was...