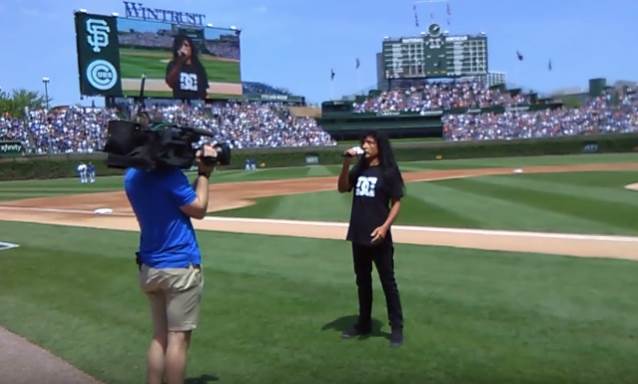 On May 25, ANTHRAX frontman Joey Belladonna sang the U.S. national anthem before Chicago Cubs' victory over the San Francisco Giants in the opener of a three-game series at Wrigley Field in Chicago, Illinois. Video footage of his rendition can be seen below.

Belladonna, who has sung the U.S. national anthem at a number of sporting events over the past several years, spoke to "Panini Unwrapped" about the experience of performing "The Star-Spangled Banner" in front of huge crowds of people, many of whom are unfamiliar with his name or the band's music.

"I just love doing the anthem," he said. "People get off on it. And I really respect the game and the anthem itself, so it's a pleasure to be able to be asked to be a part of that."

Asked how he would compare singing the anthem at a stadium to playing to large audiences composed of heavy metal fans, Joey said: "The anthem is even more tense, because you're all by yourself, everything goes quiet, and there's really no key to sing in. I just kind of go out there and just wing it, but I like to keep it traditional. But it is a very unnerving… Once it's ten minutes before they give you the okay [to go out there and sing], it's, like, 'Woah!' I've gotten nervous, but once you get going, you just focus on doing it."

Belladonna rejoined ANTHRAX for the 2010 "Big Four" shows, in the process helping inspire a new wave of creativity, beginning with 2011's "Worship Music".

"I think the best decision we ever made was getting our relationship with Joey back and just kind of repairing it and putting everything aside and just being on the same page again and just making music again that really means a lot to us," ANTHRAX drummer Charlie Benante told "Rock Talk With Mitch Lafon". "And I think that's a big thing. And all the insecurities and all the idiosyncracies and all the bullshit that goes with it, just fucking throw it out the window, because it doesn't mean… It never really meant anything, but back in the day, it meant more. Nowadays, it doesn't mean shit."