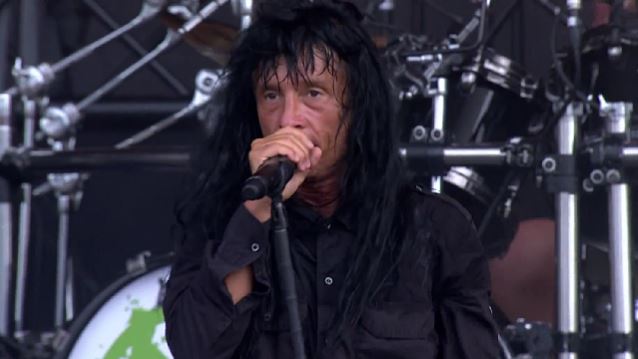 Brazil's Wikimetal podcast recently conducted an interview with ANTHRAX singer Joey Belladonna. You can now listen to the chat using the SoundCloud widget below. A couple of excerpts follow (transcribed by BLABBERMOUTH.NET).

Joey: "He's super good, man. Jon's a good guy to deal with. He seems to really be happy playing with us. He's got everything down that he needs to get down, how to be in the band. The flow is good. It's great. It was originally a really easy transition, 'cause… You know what?! [We didn't have to spend] too much time looking around for people [only to] find out a couple of them that we had gotten didn't work out or something. So it was pretty easy, I have to say."

On the progress of the songwriting sessions for ANTHRAX's follow-up to 2011's "Worship Music":

Joey: "Well, there's definitely progress. The music's coming along quite good right now. I haven't done anything on the vocal end of it. I've [just] been working on some stuff at home on my own."

On how he still manages to hit all the notes live while performing with ANTHRAX after all these years:

Joey: "Well, you've really got pay attention, for sure. There's no doubt; otherwise you're not gonna be in the game. I don't know… I have a certain mindset. I've just gotta focus on what's going on. Obviously, you have to be ready to be able to sing those songs, and to be capable. I don't know where any of that is for anyone to take note of. I just know that you really have to be on your toes to sing each night. You have to pace yourself, in a way. I mean, I'm pretty wild [on stage] — I move around a lot — so there's not a lot of breath… I give up a lot of breath by doing that, you know — not sitting still — so I'm winded quite a bit. But that's the way I like to do it. I can't just stant there. When I [play with my] cover [band], I'm [sitting] at [the] drums all night — I'm not moving one bit — which is challenging too, because that headset is in your face and you can't move, so you have to learn how to dynamically sing into that without shouting. Some people like to move the mic around and [do] some kind of fancy vibrato shit, [but] that's not really a good way to do it. There's definitely some techniques and stuff that I try to do, and a lot of it is just a natural thing. You've gotta be able to find that button."

ANTHRAX issued a live-in-concert DVD "Chile On Hell", on September 16. The effort was filmed at the Teatro Caupolican in Santiago, Chile on May 10, 2013 and features ANTHRAX performing an extended set that featured songs from the band's entire catalog.