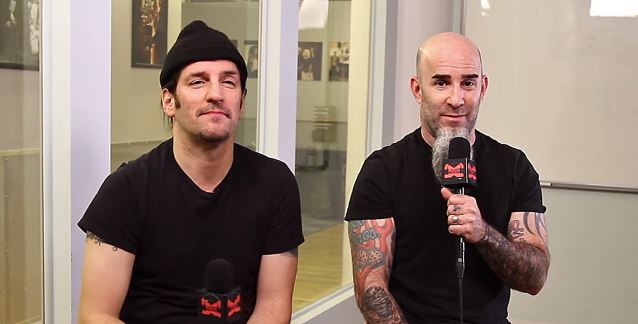 Louder Noise has uploaded a new video clip in which ANTHRAX guitarist Scott Ian and bassist Frank Bello discuss the band's new song "Blood Eagle Wings". The multipart eight-minute epic is taken from the band's latest album, "For All Kings", which was released on February 26 via Megaforce in North America and Nuclear Blast in Europe.

Ian told RollingStone.com about "Blood Eagle Wings": "I think it's our masterpiece of a song. It's the biggest, coolest thing we've ever written."

Regarding the theme of "Blood Eagle Wings", Ian said: "Any great city, whether it's London, Rome, Paris, New York, Los Angeles — these cities are alive because of how many people were killed to make these cities what they are, how much blood was spilled over time."

The Jack Bennett-directed video for "Blood Eagle Wings" can be seen below.