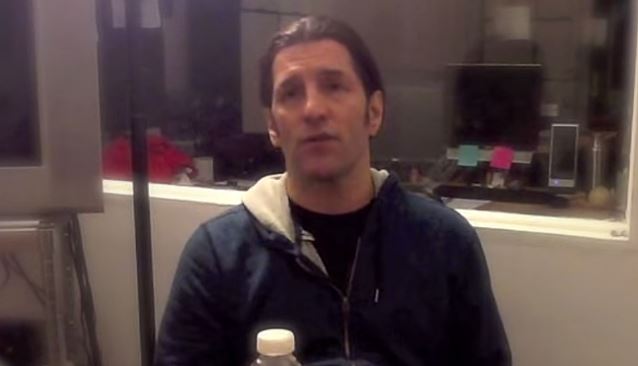 JAM Magazine recently conducted an interview with ANTHRAX bassist Frank Bello. You can now watch the chat below.

"God… Look, the best thing I can do with this thing is not overhype it, and just [have] that quiet confidence, but I'm so stoked about…

"The three of us [drummer Charlie Benante, guitarist Scott Ian and Bello] got in the studio last week, and it was, like, old-time jamming. It just built this momentum.

"It's gonna be fun to play these songs."

Bello continued: "'Worship Music', it was taken well, it sold well — thankfully — and we're thankful. We made a lot of new fans with that, along with our fan base, and we're really looking forward to the next page. We really are.

"31 years in, you'd think we'd be winding down, but I can tell, in reality, there's a fire in the belly. It's something we have to do, and there's no reason to stop. We're just having fun doing it."

He added: "People keep asking, 'What is [the new ANTHRAX music] like?' it's heavy. I think it's a bit heavier, but it's still got what you like out of ANTHRAX. 'Cause I'm a fan.

"I just say: what is it missing? I don't think it's missing anything, but I don't wanna overhype it, 'cause I'm so proud of it."

"Look, all I can say is I can't wait to play this stuff. I'm pretty psyched about it. I really am."

ANTHRAX's new album is being recorded at a Los Angeles studio with producer Jay Ruston, who also worked on "Worship Music". The group — Benante, Bello, Ian, Joey Belladonna (vocals) and Jon Donais (guitar) — has been writing and demoing new songs over the past few months and plans to record well into January. The band's as-yet-untitled eleventh full-length effort is set for a 2015 release via Megaforce.