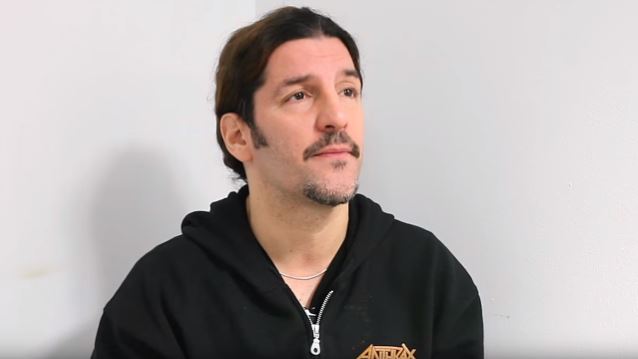 RockSverige.se recently conducted an interview with ANTHRAX bassist Frank Bello). You can now watch the chat below. A couple of excerpts follow (transcribed by BLABBERMOUTH.NET).

On streaming and illegal music downloading:

Frank: "Illegally downloading is all bullshit; it's always been bullshit to illegally download. But here's the idea. It's pretty easy to get music. Music is really cheap now, if you really think about it. What's so bad about going online…? If you have to go online, 'cause I like CDs anyway, 'cause I'm an older guy here and I just like the idea of having something physical in your hand. What's wrong with a ten-dollar or a fifteen-dollar record? You can't spare that for music that you like, to support a band that you like? That's just my thing, man. I get it; that's the new way, but there's gotta be a better way. See, I love what Adele did. I love what she did. She just made people go out… If you want her music, go out and buy a CD. I love that. That's a great thing. So if you wanna further this…. continue this music, that's the way you support it."

Frank: "I can't [comprehend it]. Here's why I can't comprehend it: I'm still in it. I feel we're very vibrant… This is a vibrant, hungry… I think ANTHRAX — to be really blunt — is hungrier now than ever, 'cause I feel like we have this burning ambition to be at another level with our stature… whatever it is. I don't even know what it is, quite honestly. I just think we have the ultimate drive right now. You'll see it on stage. You'll definitely hear it on the [new ANTHRAX] record ['For All Kings']. It's a heavy fucking record. I'm really happy to be in this band and I like where it's going. I like that people are hearing it and understanding where we are. It's from a truthful place."

"For All Kings", sold 34,000 copies in the United States in its first week of release to land at position No. 9 on The Billboard 200 chart. According to Billboard.com, ANTHRAX was last in the top 10 back in 1993 with "Sound Of White Noise", which debuted and peaked at No. 7. "For All Kings" also gave ANTHRAX its largest sales week for an album since "Sound Of White Noise"'s second week on sale (40,000; it debuted with 62,000).