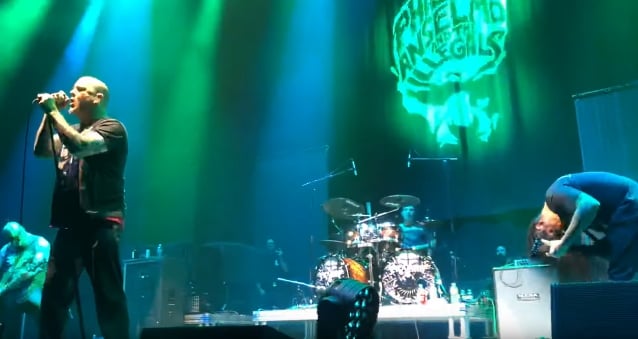 ANTHRAX drummer Charlie Benante celebrated his 57th birthday by joining PHILIP H. ANSELMO & THE ILLEGALS on stage on November 27 at MGM Grand Garden Arena in Las Vegas, Nevada to perform the PANTERA classic "Strength Beyond Strength" and part of "Goddamn Electric". Check out video footage below.

During a June 2018 appearance on Eddie Trunk's SiriusXM tribute show to Vinnie Paul Abbott, Benante said that he met the former PANTERA drummer for the first time when ANTHRAX made its Texas live debut more than 30 years ago. "And those guys [PANTERA] were there," he said. "We played at this club, and I believe PANTERA were the opening band. A mutual friend of ours, who everybody knows now — Rita [Haney, longtime girlfriend of PANTERA guitarist 'Dimebag' Darrell Abbott] — she kind of was the conduit to grouping us together to become friendly. We've known those guys since 1985, and just the two of them, Darrell and Vinnie, after you met those two, it was like you had a friend in Texas, both of them, and they just made the experience so much better, and you immediately bonded. So throughout the years, we just remained friends."

Benante went on to draw a parallel between PANTERA and another legendary rock band which featured siblings who achieved notability together.

"I always equated Dime and Vinnie as, like, Alex and Eddie from VAN HALEN; I always thought PANTERA was like VAN HALEN reborn," he said. "They had a guitar player, who was a hero. The drummers were fucking awesome, but the thing about Vinnie that, I think, not a lot of people know — maybe they do — but from a technical side of things, Vinnie made those PANTERA records sound like that. He was the guy behind it all who was turning the knobs, EQing shit so that his kick drum wasn't fighting with Darrell's fucking chunky guitar. He was a lot of the brains and the glue that held that band together and, basically, pushed that band."


One more happy birthday to my love @charbenante (we are celebrating all week) ?I’m still over the moon with how perfect his cake turned out! Exactly what we wanted (@showboybakeshop here in Vegas is exceptional) Thank you @brando.wright @eric.bonano for your help in planning and making Charlie’s birthday so wonderful. You are such incredible friends. Now let’s get some shots and eat a feast #universalmonsters #birthdaycake #vegancake