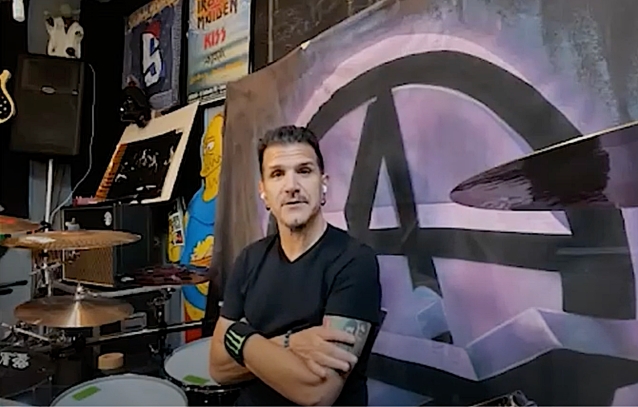 Jessica Burdeaux is always up for a challenge — whether it's playing drums with Seth Meyers's live band or at Reverb in a drum-off with acclaimed drummers. This time, Jessica goes head to head in a challenge with thrash-metal drum hero Charlie Benante (ANTHRAX) for a game of drummer's Horse.

The match poses several out-of-the-box drum challenges, like playing the drum solo break from "The End" if THE BEATLES were a thrash or punk band. Benante also reflects on the past year and talks about the inception of his new record "Silver Linings" and what's coming next.

Benante's covers album, "Silver Linings", was released on May 14 via Megaforce Records. The 14-track effort features an all-star cast of "who's who" in the thrash, metal, and rock worlds, with all cuts culled from Benante's acclaimed "quarantine jam" video series.

ANTHRAX is celebrating its 40th anniversary in 2021 with a number of special activities and events. Formed by guitarist Scott Ian and bassist Dan Lilker in Queens, New York on July 18, 1981, ANTHRAX was one of the first thrash metal bands to emerge from the East Coast and quickly became regarded as a leader in the genre alongside METALLICA, SLAYER and MEGADETH.