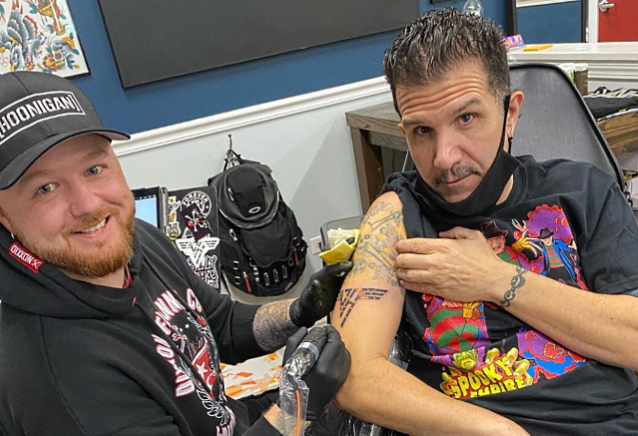 ANTHRAX drummer Charlie Benante got a tattoo of VAN HALEN's iconic "VH" logo in honor of Eddie Van Halen, who died on October 6 after a long cancer battle.

On Sunday (October 11), Benante shared two Instagram photos of him getting the ink at Electric Tattoo Parlor in Carpentersville, Illinois, and he included the following caption: "When you wake up with an idea and your friend @billy_raike_tattoos says ' let's do it' @vanhalen #tattoo @electrictattooparlor #bumblebee #eddievanhalen".

When Eddie's death was first announced, Benante wrote on his social media: "so much love for #evh can't believe this fucking year @vanhalen I often said that He was the One that revolutionized guitar playing , after #evh most guitar players started to sound like him. He was so percussive and he made mistakes sound correct ( tho he never made one) Our hero's are all leaving and I hate it!!! #ripevh big [love] to the @vanhalen family".

Eddie died at the age of 65 at St. John's Hospital in Santa Monica, California. His wife, Janie, was by his side, along with his son, Wolfgang, and Alex, Eddie's brother and VAN HALEN drummer.

The legendary VAN HALEN axeman passed away from complications due to cancer, his son confirmed.