One of the albums that can be pinpointed to as the birth of thrash metal is ANTHRAX's 1984 debut, "Fistful of Metal", a recording that perfectly set the stage for the group's subsequent triumphs, and introduced the world to this hard-hitting New York band. To celebrate the album's 25-year anniversary, Megaforce Records is releasing a limited edition (only 2,000 copies will be made) vinyl release of the album on May 12, 2009. But this is no ordinary vinyl reissue, as it will be spread over three 10-inch records in a tri-fold die cut jacket, and will also include the group's 1985 EP, "Armed and Dangerous". The "Fistful of Metal" vinyl limited edition reissue will retail for $39.98 and will be available at ANTHRAX's official website — Anthrax.com — Amazon.com and record stores across the country.

"We thought, 'What kind of a great package do we do?'," says Megaforce Records Vice President, Missi Callazzo. "Everybody thought 'picture disc,' but picture discs don't really sound so great, so what we decided to do were three 10-inch records that will be in a gatefold jacket. We're die-cutting the cover, so the illustration of the guy and the fist are die-cut, and when you pick it up, that's where the ANTHRAX logo is. We thought something 'super custom' to celebrate the band's 25th anniversary."

Longtime band members Charlie Benante and Scott Ian went into their storage facilities and grabbed old reviews, clips, photos and things from magazines to be used in the package. "Finally, 'Fistful of Metal' with photos!" laughed Ian. "We did a photo shoot for the record back then and we hated the pics. It was fun to get into the time machine and re-live that time, well, for an hour anyway. Listening to the record after 25 years, and it still feels full of life. Strangely, I don't feel too far removed from what we were doing then."

The only ANTHRAX record to feature singer Neil Turbin and bassist Danny Lilker — in addition to Ian (rhythm guitar), Benante (drums), and Dan Spitz (lead guitar) — "Fistful of Metal" was originally released in January 1984, spawning such early ANTHRAX classics as "Deathrider" and "Metal Thrashing Mad". The five-song EP, "Armed and Dangerous", was originally released in February 1985, and signaled the recording debuts of singer Joey Belladonna and bassist Frank Bello. The EP featured re-recordings of two "Fistful" tracks ("Metal Thrashing Mad" and "Panic"), as well as a cover of the SEX PISTOLS' "God Save the Queen", plus two originals, "Raise Hell" and the title track.

Also tying in with the reissue of "Fistful of Metal" will be ANTHRAX's first new studio album in six years (and first album for the Megaforce label in almost 19 years), "Worship Music", set for a summer release. "I worked with ANTHRAX years ago," recalls Callazzo, "and when I heard that they were looking for a deal and to do a new album, I talked to them right away. Those guys are literally like family to me. We're all excited that they're back here on the label."

And lastly, how does the music on "Fistful of Metal" and "Armed and Dangerous" hold up today? According to Callazzo, "I was doing something, had music on my computer, kind of just running. Y'know how you don't know what is playing because you're working? And I was like, 'Wow, this sounds great,' and it was ANTHRAX! 'Fistful of Metal' and 'Armed and Dangerous' sound so timeless."

METALLICA's Kirk Hammett: "ANTHRAX's music matters. In the pantheon of modern metal, ANTHRAX is certainly a cornerstone, and if one listens, one can hear their influence on any number of up-and-coming bands of the new generation."

Charlie Benante: "This is where we were in 1984, young adults making a musical statement. We really didn't know what we were starting, we were just living it." 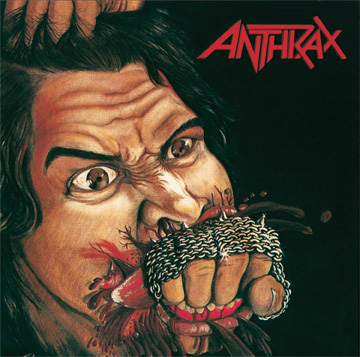