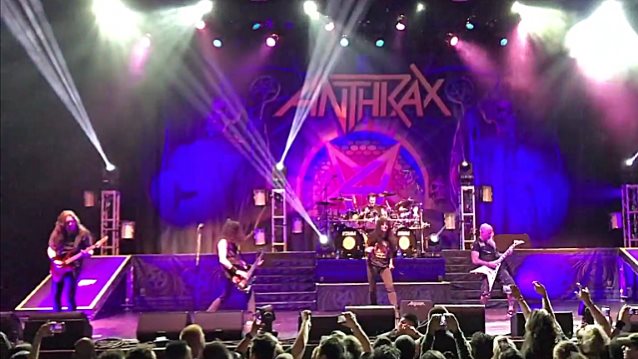 This past Saturday (April 22), ANTHRAX closed the show at the sold-out Los Angeles "KillThrax" tour stop and those in attendance witnessed an exclusive treat: the band's first-ever live performance of "Carry On Wayward Son", the thrash legends' cover of the classic KANSAS song.

With shout-outs from fans for the band to play the song at the "KillThrax" shows, airplay on Active Rock stations across the country, more than 300,000 YouTube views, and even a "thumbs-up" for the cover from KANSAS founding member Phil Ehart, the band decided it was time to play it live.

ANTHRAX fans are well aware that there is no keyboardist in the band and keyboards are prominent on this song, so the band enlisted the help of Fred Mandel to join them onstage at the Wiltern theater for the performance. Mandel recorded the keyboards for the "Carry On" cover track and has played with icons from Alice Cooper to Elton John to QUEEN.

ANTHRAX's cover version of "Carry On Wayward Son" is a bonus track on the new expanded vinyl edition of the band's latest album, "For All Kings".

ANTHRAX drummer Charlie Benante told The Aquarian Weekly that he had long been a fan of the KANSAS cut, and frequently drummed to it as a teen. "I had to go back into the hard drive of my brain and remember how to play the song. We wanted to do it justice," he said.

Available exclusively in North America and released in conjunction with ANTHRAX's spring co-headline tour with KILLSWITCH ENGAGE — "KillThrax" — the "For All Kings 7-Inch Box Set" retails for $79.99, and is an absolutely stunning collector's item for any ANTHRAX fan.

The "For All Kings 7-Inch Box Set" includes a removable lenticular cover and contains ten seven-inch vinyl discs featuring twenty songs — the eleven finished album tracks, two brand new covers (THE WHITE STRIPES' "Black Math" and " Carry On Wayward Son"), six demos from the "For All Kings" track listing, and "Vice Of The People", previously released as a bonus track only in Japan. The original album cover art sketch by Alex Ross is also part of this package, as well as a download card enabling the holder to access the box set's track listing for free.

"Doing a box-set edition of 'For All Kings' was something that we've always wanted to do," said Benante, who worked closely with Heusser and Thompson on the box set's artwork. "We wanted to do something special, something that was so much more than the original release, and have it be fun for our audience when they open it up, just be floored by the different colored vinyl, the artwork, everything that's inside. And we think we've done that."