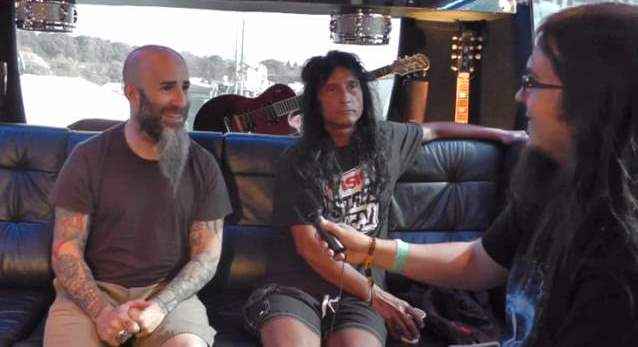 Terrorizer magazine conducted an interview with ANTHRAX singer Joey Belladonna and guitarist Scott Ian on August 11 at the Bloodstock Open Air festival at Catton Hall, Walton-On-Trent, West Midlands, United Kingdom. You can now watch the first part of the chat below.

Guitarist Jon Donais (SHADOWS FALL) has been touring with ANTHRAX since Rob Caggiano's departure in January and will continue to play with ANTHRAX for the foreseeable future.

Speaking to Metal Hammer editor Alexander Milas for the "Metal Hammer" radio show on TeamRock Radio, ANTHRAX's founding rhythm guitarist Scott Ian stated about the band's current second-guitarist situation: "Jon's been with us since February, and I think I can safely say he's passed the audition… [laughs]. I know we haven't said anything official yet, but in my mind, he's the guy. I'm sure some type of official announcement… because in this world, people apparently need that kind of information so they can sleep well at night. But as far as I'm concerned, Jon is the guitar player in ANTHRAX."

ANTHRAX drummer Charlie Benante is recovering from surgery for carpal tunnel syndrome. He is expected to rejoin his bandmates on the road on September 13 in San Bernardino, California.

Dette previously filled in for Benante on ANTHRAX's European tour last fall as the support act for MOTÖRHEAD and Australia's Soundwave Festival in February/March.