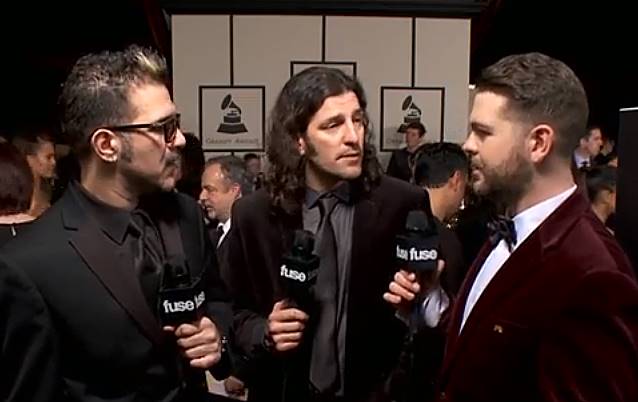 ANTHRAX members Charlie Benante and Frank Bello (bass) were interviewed by Fuse News senior contributing correspondent Jack Osbourne (Ozzy Osbourne's son) on the red carpet at the 56th annual Grammy Awards, which was held last night (January 26) at the Staples Center in Los Angeles. You can watch the chat below.

Bello recently told U.K.'s Metal Hammer magazine about the progress of the songwriting sessions for the band's follow-up to 2011's "Worship Music" album.

"I think we've got twelve songs for the new ANTHRAX record right now, and I don't know what happened, but for some reason, there's a great jam going on," he said.

"Scott [Ian, guitar], Charlie [Benante, drums] and I have been getting together and it's been running smoothly. Maybe it's been from all the touring we did for 'Worship Music', but we're not used to it coming together this fast.

"Scott and I were talking about it recently, how some of it is really tough to play. We need to warm up into it, and that lends itself to some fun, so I love the challenge of it all, and we just want to push it to the next level. That's all we want to do."

Asked how he would compare ANTHRAX's new material to "Worship Music", Ian told Metal Insider: "It's hard to compare. That, to me, has always been the hardest question and it's something I just don't like to do because to me it's just all ANTHRAX. I would just tell you anything we've ever done is ANTHRAX, so I don't know how to compare it to 'Worship Music'.

"If you liked 'Worship Music', you're gonna like this. The one thing I can say is that it definitely has more thrash elements. It definitely hearkens back to more of who we were in the '80s, yet at the same time sounding like us now in present day, which is what a lot of people said about 'Worship Music'. I think this one hits even harder and faster, more brutal with crazier riffs.

"We were all super inspired coming in and working with Charlie and Frankie in the room, and then having Jay in the room with us as well, has been amazing because he really pushes us. He pushes us hard. Like when we may get stuck on something in an arrangement or where to go with a melody, he will really push us and make sure we're not just saying, 'Alright, that's good.' He's like, 'No, that's exactly what to do. It's just good, now work harder.' We all trust him so much, so it's great having him in the room there to push us."

ANTHRAX's next album will mark the recording debut with the band of lead guitarist Jonathan Donais (SHADOWS FALL), who replaced Rob Caggiano in January 2013.