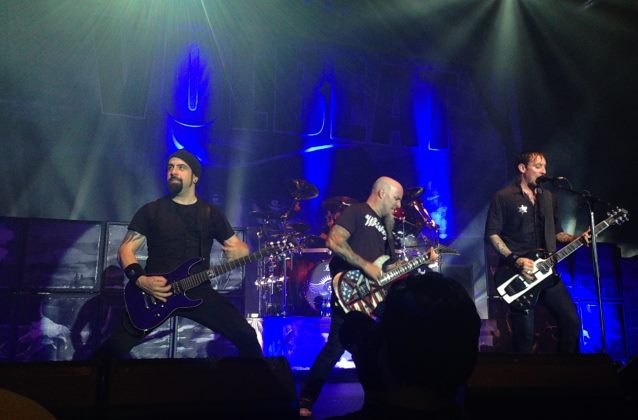 ANTHRAX guitarist Scott Ian joined VOLBEAT on stage last night (Monday, September 16) at the Hollywood Palladium in Los Angeles to perform the song "Pool Of Booze, Booze, Booza" (preceded by a snippet of ANTHRAX's "I Am The Law"). Fan-filmed video footage of his appearance can be seen below. The photo above comes courtesy of Jose.

Former ANTHRAX guitarist Rob Caggiano, who was a producer on VOLBEAT's fifth studio album, "Outlaw Gentlemen & Shady Ladies", recently joined the band as its new guitarist. He replaced guitarist Thomas Bredahl, who was given his walking papers in November 2011.

Asked what led to his departure from ANTHRAX, Caggiano told FaceCulture: "It just boils down to the fact that I never had any creative input, so there was no emotional connection to the music. And I don't know if it's 'cause I'm getting older or whatever, but it just got to the point where I started feeling like I was ging through the motions, and that's a terrible feeling to have when you're playing music. And it's not who I am. I can't do anything in life unless it's 200%; that's just the way that I am. So I knew I needed to do something, I knew I needed to make a change. And that was a really hard, emotional time and an emotional decision for me to make."

Regarding how the ANTHRAX guys reacted when he told them he was leaving the band, Rob said: "They totally understand. We're still friends, we're still cool. We've hung out a couple of times since this whole thing went down. I think they get it; they understand how I felt and why I felt the way I did. And I think on that level, it's cool. I mean, I hope it is. It seems like it is."