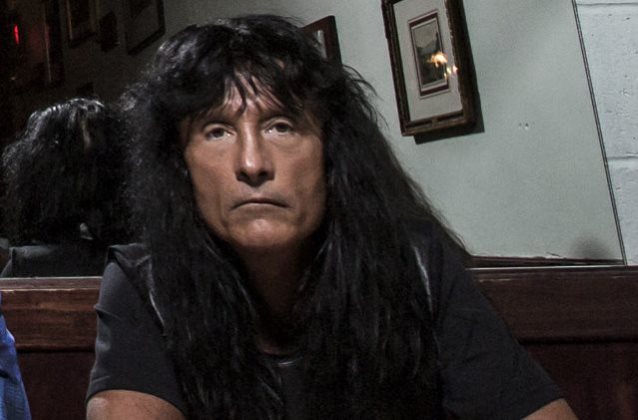 Headbanging TV conducted an interview with ANTHRAX singer Joey Belladonna on June 28 at Reflektor in Liège, Belgium. You can now watch the chat below.

Asked about the thirtieth anniversary of ANTHRAX's "Among The Living" album and why that record is so important to the band, Joey said: "It was a successful record. We had a lot of great songs on there. It kind of evolved from 'Spreading The Disease' into that album, 'cause it was a bit different. So it was just the start of a good time for the band. It's just a special record."

Regarding whether he had any idea, during the making of the "Among The Living" LP, that the album would have such a long-lasting impact, Joey said: "I had no idea about anything, to be honest with you. I was just wondering how the whole band was gonna develop, at least from my style, 'cause it was something new for me. You never know — you just don't. Even now when we do records, you have no idea what anybody's perspective on a song is gonna be. As long as we are happy… That's your main goal — to be happy when you write it and you do it. You hope for the best. But the main thing is for us to be happy. And then if everybody likes it, gosh, then you're really happy."

To coincide with ANTHRAX's current European tour, the band has released a digital two-track single titled "Leftoverthrax", including cover versions of KANSAS's "Carry On Wayward Son" and THE WHITE STRIPES' "Black Math".

ANTHRAX's cover version of "Carry On Wayward Son" is a bonus track on the new expanded vinyl edition of the band's latest album, "For All Kings".

Filling in for regular ANTHRAX drummer Charlie Benante at some of the European shows is Jon Dette. Benante is forced to miss certain gigs on the band's tour due to his continuing battle with carpal tunnel syndrome.

Dette first stepped in for Benante during ANTHRAX's appearance at the Soundwave festival in 2013 and at a number of European shows in 2014.