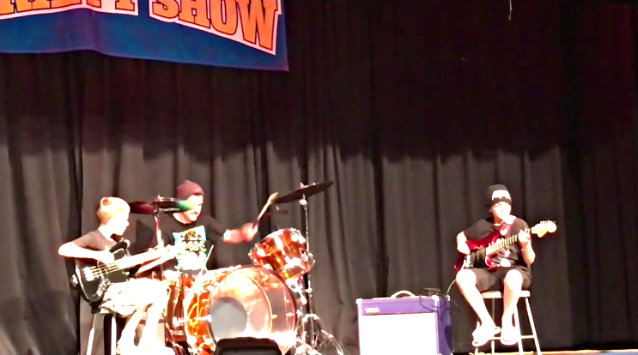 ANTHRAX's Charlie Benante has posted a video of him performing with a couple of young rockers as part of the fifth-grade variety show at Kildeer Countryside Elementary School in Long Grove, Illinois.

Benante's daughter attends the school where the drummer sat in with the Mikey Goldberg and Grayson Perri as they performed a medley of BLACK SABBATH's "Iron Man" and THE WHITE STRIPES' "Seven Nation Army".

"Helping out at my daughters school," Benante wrote in the accompanying caption. "Kildeer Elementary School w/ Mikey Goldberg on bass and Grayson Perri on electric guitar. You guys rocked the 5th grade Variety show!!!! Passing on the torch to the next generation of Rock N' Roll!"

ANTHRAX bassist Frank Bello told Evie Star Music in a 2016 interview that "it's harder now than ever" for new bands to make a living from playing music. He explained: "I'm in a band that's been around for thirty years, and I see how hard it is for us. So I feel bad for the bands that are starting out now because there's no outlets, and the only way you can do this is get on any show you can get. Just play your ass off, as we did. You have to get in a van, travel for one show, get on the road, and whatever you can do to promote your band and get that vibe going and that buzz. [There's] gotta be fire in your gut. We all have this fire in our gut, like, 'This has gotta come out. I've gotta get this out.' And it comes out in our music. That's gotta feed you to stay on the road, to really do what you've gotta do, 'cause, look, you're gonna smell, you're gonna stay in the back of that van, and you're gonna be hungry."

He continued: "I remember in the early days [of ANTHRAX], [we were getting] five dollars a day, even when we had a record deal. Five dollars a day to eat, and that was breakfast, lunch and dinner, and that had to really last you, and at the end of the day, it did last you, so you picked a meal. So it was McDonald's, Burger King, blah blah blah. But that's the way it works. It's all about the fire in your belly and believing in what you do. It's tough, but if you really want it…"

Helping out at my daughters school!
Kildeer Elementary School w/ Mikey Goldberg on bass and Grayson Perri on electric guitar. You guys rocked the 5th grade Variety show!!!! Passing on the torch to the next generation of Rock N' Roll!

Posted by Charlie Benante Official on Saturday, May 13, 2017