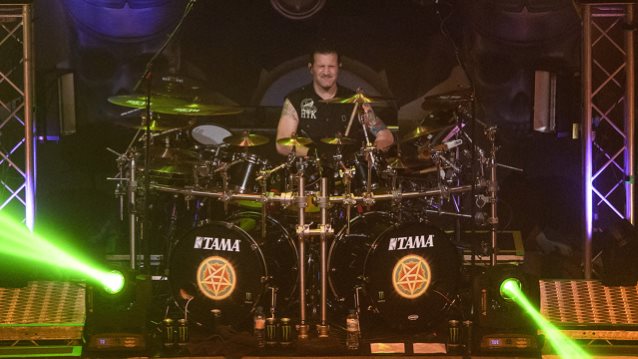 ANTHRAX drummer Charlie Benante was recently interviewed by U.K.'s "Mike James Rock Show". You can now watch the chat below. A couple of excerpts follow (transcribed by BLABBERMOUTH.NET).

Charlie: "That was awesome. I read something yesterday Kirk Hammett [METALLICA guitarist] said about he sees more 'Big Four' shows in the future. So I read it, and I was, like, 'Oh, that's pretty cool.' We had a great time doing that. I think that was really the catalyst to get us back on the map. We really got our shit together."

On the success of ANTHRAX's latest album, "For All Kings":

Charlie: "I think it's, like, when you make good records and you make good music, I don't think it's stoppable. I think it's just a question of reaching as many people as you possibly could to make them aware of, 'Do you know this record? You should know this record?' That type of thing. And I find the lack of really good records nowadays disturbing, because… If I come out and say that I think a lot of the records that came out were kind of half good, half bad, people will look at me, like, 'Who the fuck is he to say?' You can't even say anything about music anymore. I take music really music seriously. I studied this shit since I was young. So when I say it lacks something, it's not coming from just a personal view; it just lacks something from something that I've learned throughout the years of how a good record is a good record, a shitty record is a shitty record."

Charlie: "You try and do the best you possibly could. I'm the biggest nitpicker about stuff. I won't show the guys anything 'till I feel it's ready. And plus it just makes it go faster when you have a completed piece, and then you show everybody, and then you get the 'Yeah,' or you get the, 'Hmm…. Let's work on that.' So that's how it works in the band."

ANTHRAX played its last "Among The Kings" U.K. date this past Friday (February 17) in Norwich and has headed to 22 European cities, winding up in Paris on March 16.