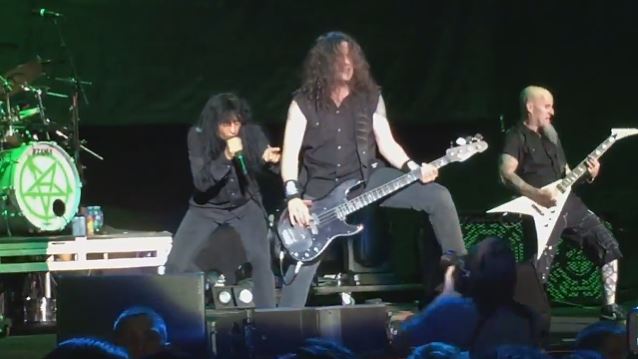 ANTHRAX played a snippet of a brand new song during their appearance last night (Saturday, October 25) at Knotfest in Devore, California. Check out fan-filmed video footage below.

ANTHRAX drummer Charlie Benante told the "Do You Know Jack?" radio show on CKLB FM last month about the progress of the songwriting sessions for the band's follow-up to 2011's "Worship Music" album: "The guys [guitarist Scott Ian and bassist Frank Bello] were here. I have a studio here at my house. When we did the last record, a lot of it was done over here. And they were in this past weekend. We were working on some of the new songs."

He added: "This [album] is shaping up to be just as good as the last one."

Benante was reluctant to offer a possible release date for the new ANTHRAX CD, explaining: "If I say, 'We're looking at this date,' then it just gets [to be], 'Oh, you said that was gonna be around this date.' So… [But] it won't take eight years to make another record.

Asked about how the new ANTHRAX material is shaping up, Bello told WVOX "Metal Mayhem" host Matt O'Shaughnessy that there are "16 or 17 songs" that the band is working on right now, with plans for the bassist to get together with guitarist Scott Ian and drummer Charlie Benante in New York City "to do some more stuff — just make [the tracks] compact, just make them better and better."

Regarding the musical direction of the new ANTHRAX material, Bello > told WVOX "Metal Mayhem" host Matt O'Shaughnessy: "It hurts to play it. How about that? [Laughs]

"I'll tell you… Scott and I were jamming with Charlie in Chicago, just doing the demos as we do before we record the record… And you know, after we're done with a song and you're shaking your hand like do do a fast ball? I'm telling you, the blood needed to flow again…

"I like the fact that we have to work for this. That means there's something going on with these songs — whether it's fast picking, whether it's just digging into it, something that both [Scott and I], we looked at each other and started laughing, and we started shaking our hands: 'That's gonna be a good one.' And that's the kind of record this is.

"This is a heavy record, man. This is a heavy, riff-oriented record. It's more thrashier, with [singer Joey] Belladonna's big vocals and melodies, which is gonna be great.

"I like the fact that this is a challenge to play this record. I wanna say that we're having fun with the challenge of playing this record. So that's what I look forward to."

In a recent interview with Kaaos TV, Ian stated about ANTHRAX's recording plans: "There's no plan [for us to enter the studio by a specific date]. Just like 'Worship Music', when it's ready, it's ready. We're not rushing anything. When we feel like we've got the record we need to make, either this year or next year, whatever it is, that's when we'll go in to start recording it."

Regarding whether he expected the recording process to be easier this time around since this will be Belladonna's second album with ANTHRAX since rejoining the band, Scott said: "Well, things weren't hard last time. Truthfully, the recording of 'Worship Music' couldn't have gone smoother with Joey. So I don't foresee any problems. We're doing it the same way we did the last record, and we're working with [producer] Jay Ruston again, producing it. So I don't know if that's a case of it being easier. It's not gonna be harder, I don't think; let's put it that way. I foresee it being very much similar, hopefully, to the process of last time, because last time it went great."

"We don't think about it that hard. We just start writing songs, and it just kind of goes. And then at some point, you say, 'Hey, this has come together really well. Maybe we should start recording these.' That makes it sounds very easy, but it's not. It's usually about year's worth of banging your head against the wall to get it done. It's a lot of work, but at some point we'll know we're ready."

"Every record we've made, we don't compare it to our previous catalog. I don't look at it as, 'OK, this is our eleventh record, or tenth record'; I'm not even sure which number it is. I just look at every record as being of its time, when we had the time to write those songs and record that record. That's it. We just do the best we can in the time we have. Like, now we started writing, whatever, last year, and we're still writing, and we'll probably still be writing for a few more months, and then we'll start recording it. And the record will be of that time period. And that's kind of how I look at every record we've ever made — we just did the best we could in the time period we had to write and record the album."