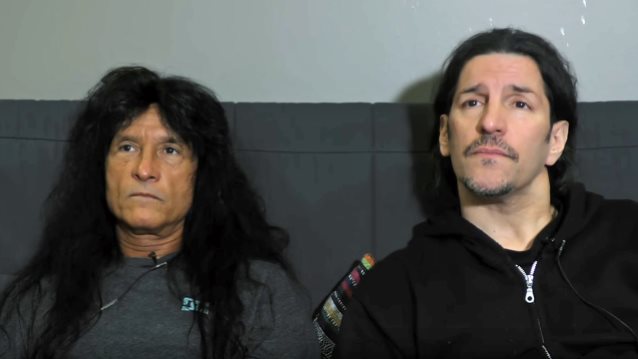 On February 19, Holland's FaceCulture conducted an interview with ANTHRAX singer Joey Belladonna and bassist Frank Bello. You can watch the chat in two parts below. A couple of excerpts follow (transcribed by BLABBERMOUTH.NET).

On what they would attribute ANTHRAX's longevity to:

Frank: "Love for music. I don't know… just love for a good song. I just think we know we work well together, and people like what we do."

Joey: "And we're musicians that wanna be good at what we do. That's the strive even for me, and I'm sure for Frankie — to be really good and to be able to show somebody that this is what we… You know, we're artists and we wanna show you what we've got and how we perform."

Frank: "Strive to be the best we can be. Do our best. That's all we can do. And if people react to it, that's great. We just wanna write the best song, be the best live band we could, and hopefully people bring something home from that. Hopefully it inspires new bands. I mean, it's like that — you pass the torch and all that. It's important."

Joey: "And we love music. Music is the biggest thing about the whole thing. Being into music so deeply that you can do this a lot."

Frank: "If something we do can inspire the next great riff or the next great band or whatever, the young-band generation, man? Go for it. We love that."

On mixing music with business:

Joey: "That's a whole another thing."

Frank: "When art and business get together, they're oil and water — they separate. And you have to learn how to really negotiate through the business to get to the art. It's really hard after a while, but after a while, I guess you get a coldness to you. You have to… This is business, this is art. You have to separate them. But one has to work with the other; it does."

On how being a professional musicial in 2017 is different from how it was thirty years ago:

Frank: "Thankfully, with this technology, we can call our kids and stuff like that at home and talk to our wives, blah blah blah. On the other side, the music business is completely different. Illegal downloading killed record sales — killed it. Unless you're Adele. But that's the truth. And you have to stay on the road, as we do. We've always been on the road, but now there's so many bands, the only way they can make it go and make it work is to stay on the road now. That's just the way life is now, because the [people involved in the] music business haven't figured out how to make money on records. I mean, some people do — the biggest of the big — and even them, they're not even selling as much as they used to. But then there's always Adele."

ANTHRAX played its last "Among The Kings" U.K. date last Friday (February 17) in Norwich and has headed to 22 European cities, winding up in Paris on March 16.