ANTHRAX guitarist Scott Ian and his wife, Pearl Aday, along with ARMORED SAINT/FATES WARNING bassist Joey Vera, will perform at a benefit for Jason Becker and ALS research on Thursday, September 19 at Bimbo's in San Francisco, California.

For more information, and to purchase tickets, visit Ticketfly.com.

The DVD version of the documentary film "Jason Becker: Not Dead Yet" was released last December in North America via Kino Lorber.

The world premiere of "Jason Becker: Not Dead Yet", took place on March 3, 2012 at the Cinequest film festival in San Jose, California at the San Jose Repertory Theatre.

"Not Dead Yet" won two awards at at the Cinequest: Audience Award for Best Documentary and the Special Jury Prize for Documentary.

Jason Becker was diagnosed with amyotrophic lateral sclerosis (ALS, aka Lou Gehrig's Disease) at age 20, shortly after joining David Lee Roth's band for the gold-selling 1991 album "A Little Ain't Enough". Although the disease robbed him of his ability to play guitar — and eventually left him both paralyzed and unable to speak — Becker continues to compose music with the help of computers, collaborators, and a system of communication using eye movements that was devised by his father Gary. 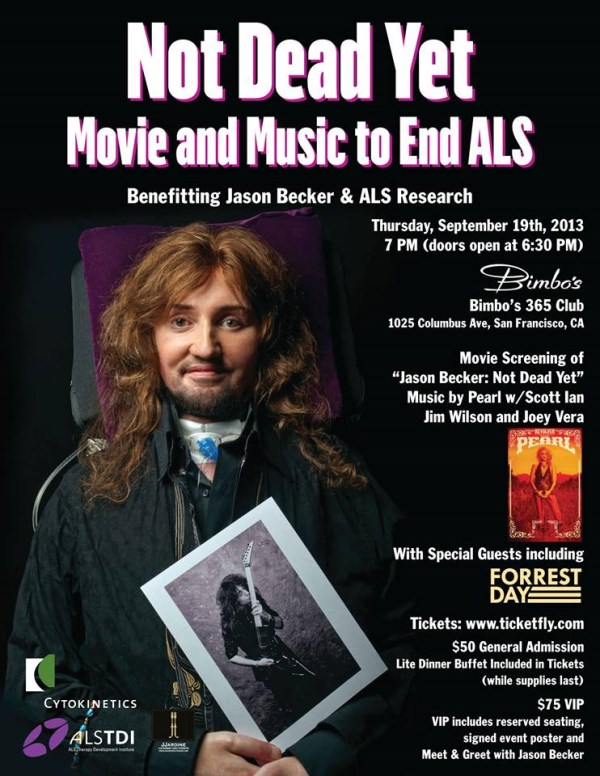