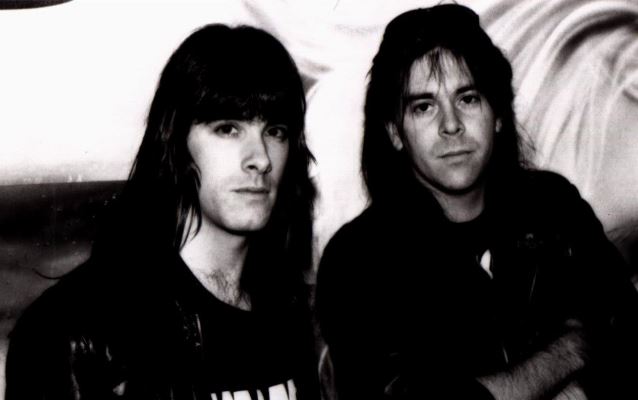 ANNIHILATOR mastermind Jeff Waters has invited the band's former vocalist, Coburn Pharr, to feature in their performances when the 70000 Tons Of Metal cruise sails to Jamaica in January 2015. Pharr was lead vocalist on ANNIHILATOR's critically acclaimed and best-selling 1990 release "Never, Neverland", which includes classics such as "Road To Ruin", "I Am In Command", "Reduced To Ash" and "Phantasmagoria".

Waters comments: "Seeing as how it is the 25th anniversary of my favorite ANNIHILATOR album, I thought it would be a lot of fun to invite Coburn with us to perform some of the songs he was a part of. I haven’t seen him since 1992 so I think the fans are going to spot us having lots of conversations about the old days (and my '80s hairstyle)! Current ANNIHILATOR vocalist Dave Padden is very much looking forward to this as he is a huge fan of that album and Coburn, but also because he won’t have to play and sing those songs. [Laughs]"

Waters will also host the Jamming With Waters In International Waters All-Star Jam which will feature members from the 60 bands on board 70000 Tons Of Metal, including ARCH ENEMY, APOCALYPTICA, BEHEMOTH, BLIND GUARDIAN, CANNIBAL CORPSE, DESTRUCTION, MICHAEL SCHENKER'S TEMPLE OF ROCK, NAPALM DEATH, THERION, VENOM and many more.

70000 Tons Of Metal will sail Thursday, January 22, 2015 on board the Royal Caribbean "Liberty Of The Seas" from Port Everglades in Fort Lauderdale, Florida to Ocho Rios, Jamaica and will not return to the real world until Monday, January 26, 2015.

Ticket prices start at USD $666 per person (plus taxes and fees), which includes all on-board entertainment, non-alcoholic and non-carbonated beverages, most on-board restaurants and even 24-hour room service.

Check out www.70000tons.com and book your ticket now.