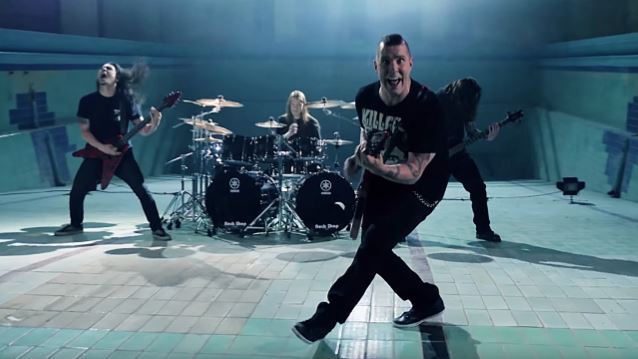 The official lyric video for the song "Creepin' Again" from Canadian thrash/heavy metal masters ANNIHILATOR can be seen below. The track is taken from the band's fifteenth studio album, "Suicide Society", which will be released on September 18 via UDR Music. As he has in the past, guitar wizard Jeff Waters handled all songwriting duties, played all guitar and bass, engineered, produced, mixed and mastered "Suicide Society", and he is also back commanding lead-vocal duties, as he did on the critically acclaimed "King Of The Kill" (1994), "Refresh The Demon" (1996), "Remains" (1997) and other ANNIHILATOR albums over the years.

ANNIHILATOR's touring lineup will include drum monster Mike Harshaw, who continues on for his fourth year with the band; and new guitarist Aaron Homma.