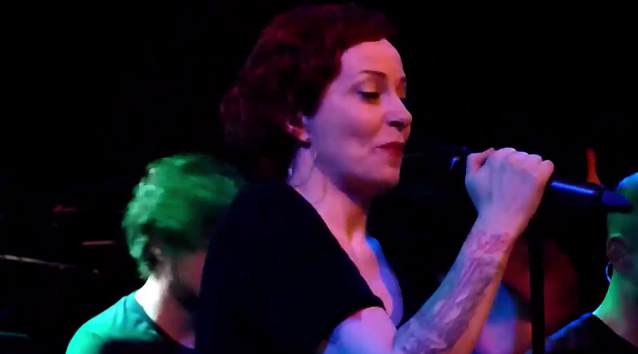 Video footage of former THE GATHERING singer Anneke Van Giersbergen's March 30 performance at Le Bikini in Toulouse, France can be seen below.

Anneke Van Giersbergen's new solo album, "Drive", was released on September 23, 2013 in Europe and on October 15, 2013 in North America via InsideOut Music.

Anneke told Classic Rock Revisited about the CD: "Almost immediately after the release of my last album, 'Everything Is Changing', I started touring live with a very talented, and nice, group of people. We toured over 25 different countries, and I think we had a really great creative energy on and off stage, so I wanted to capture that 'making music together' feel on this album."

Regarding the inspiration for the "Drive" title track, Anneke said: "I like driving, being on the move, playing music on my car stereo, but I also think that having a certain drive in your character keeps you going. I don't consider myself as ambitious, because I just love making music and I don't really focus on success, but I like to 'go somewhere,' better myself, explore new styles, so in a way that's what drives me."