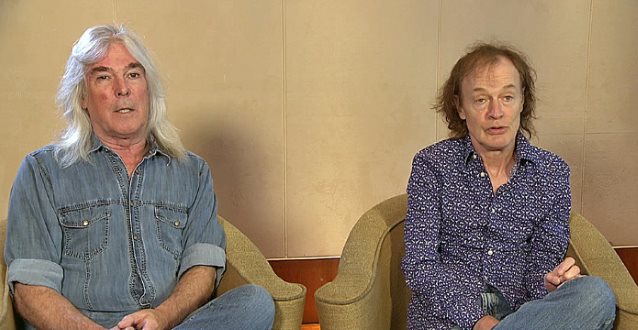 AC/DC guitarist Angus Young says that no decisions have been made yet regarding the band's future after the completion of its current tour featuring Axl Rose on vocals.

The legendary Australian rock band postponed the last ten dates of its recent North American tour after doctors told singer Brian Johnson he faced "total hearing loss." AC/DC has since announced that it will use the GUNS N' ROSES frontman as a "guest vocalist" for all remaining shows this year, with Johnson apparently not returning to the band at all.

Speaking to Germany's NDR.de earlier this week, Angus stated about Axl's performance with AC/DC thus far: "He's doing very well, and it's very good that… I mean, under the situation that we had, it was very good that he volunteered and said, 'Hey, if I can help, let me try.' So he's been very good. And he had to learn a lot of songs very quickly, and he's done a great job."

AC/DC bassist Cliff Williams told NDR.de: "[Axl has] done a fabulous job. And he's almost out of his chair now. He's mobile, and he's enjoying himself. It's been really good."

Added Angus: "His leg's repairing, so each show we've been doing he's been getting up and moving around a lot more. So it adds more to the show."

Asked about AC/DC's future plans beyond the current European tour and the upcoming North American dates, Angus said: "We were committed to finishing this tour, so that's been our main goal, and Axl helping us. I know he's very excited; he keeps saying, can he do more? But we don't really know at the end how we will [go from here]. But we wanna get this tour, which we were committed to doing, we wanna finish it."

During an interview with BBC 6 Music's Matt Everitt, Rose stated about his plans with AC/DC after the European shows: "There's makeup dates in the States, and if I don't get throw out before then, I'm looking forward to doing [them]. I think after that, it's about what they wanna do. I'm in if they want me in, and we'll sort it out, but right now that's getting ahead of ourselves with everything else that's on the table."