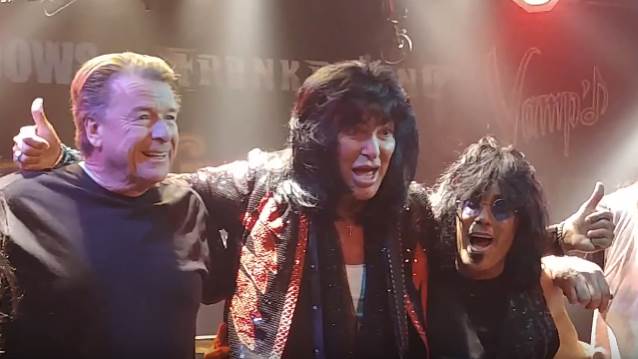 Punky Meadows and Frank Dimino of ANGEL played to a packed house June 15 at Count's Vamp'd in Las Vegas when, unexpectedly, former ANGEL keyboardist Gregg Giuffria walked onto the stage to the roar and cheers of shocked fans and kicked off "The Tower" for the encore. The crowd was in a trance and Gregg sounded great, as if he never stopped playing with the guys. The chemistry and vibe was magical.

This was the first time Gregg, Punky and Frank performed together in over 37 years. You can clearly see in the video footage below that he was really enjoying himself, as did Punky, Frank, and the rest of the band on stage. This was a very special moment for ANGEL fans indeed.

Meadows and DiMino are continuing their joint tour, with stops including Chicago, Detroit, St. Louis and Nashville. They will also play in the U.K. for the first time in October.

DiMino joined Meadows on stage for the first time in over 30 years in March 2017 to perform the ANGEL song "Tower" at the Backstage Bar And Billiards in Las Vegas, Nevada.

Punky and Frank, along with other former members of ANGEL, appeared at the 2016 Vegas Rocks! Hair Metal Awards at the Eastside Cannery Hotel & Casino in Las Vegas. The group received the "Glam Rock Legends" award in honor of their contributions and influence in music. Accepting the award were Meadows, DiMino, Gregg Giuffria, Barry Brandt, and Felix Robinson. This marked the first time all surviving ANGEL bandmembers — bassist Mickie Jones passed away from cancer in 2009 — had been on stage together since 1980.