"The BLASPHEMIC CRUELTY debut album entitled 'Devil's Mayhem' is now complete. Work has been done in sessions on and off since April this year. The final swing covering three weeks ending on August 1 was an extreme guerilla warfare recording/mixing process resulting in an album erupting with frenzied blasting malevolence. Totally grim, hellish death/thrash terror and darkness. We'll soon be setting up an official MySpace page and regular webpage. Also, we will have a sample track to hear, and the sites will show our first merchandise items available.

"I must thank my bandmates Gina Ambrosio (drums) and Alex Blume (bass, vocals) for their exhaustive efforts in this creation, as well as Juan 'Punchy' Gonzalez for his work engineering this album. Watch for this release through Osmose Productions soon."

ANGELCORPSE's latest album, "Of Lucifer and Lightning", was released in the U.S. in June 2007 via Osmose/The End Records. 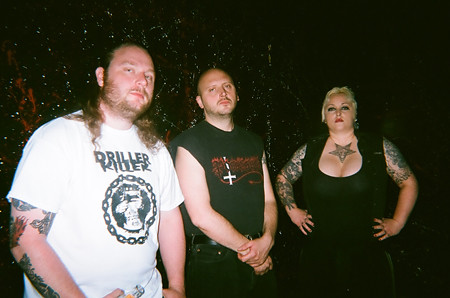