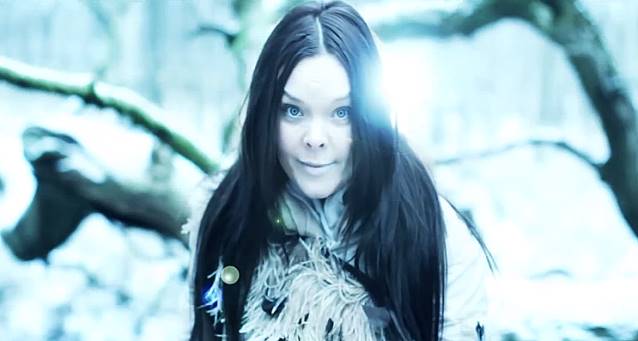 PlanetMosh recently conducted an interview with former NIGHTWISH singer Anette Olzon. A couple of excerpts from the chat follow below.

PlanetMosh: On the "Showtime Storytime" NIGHTWISH DVD, you don't appear in the documentary about the "Imaginaerum" tour. Why did you request that you not be seen or heard in it?

Olzon: I said I didn't want to be in that; it was my decision. There were many reasons. First of all, we had only talked about the documentary in a loose way before the tour started, that maybe we would do a documentary, and then when everything ended and they kind of fired me in a very bad way, I was quite angry and sad about the situation. Then a few months later, they asked my manager if I wanted to pay for this documentary and be in it, and my reaction was: "Why?" There's a new singer and they'd done this in a bad way, so I didn't want to participate. In many ways, it was not only because I was angry, but also because I didn't understand why, and also because I didn't want to have half of the documentary about me and then half about the new singer — there would be comparisons, and I didn't know how they would showcase me. Would they show me in a bad way or a good way? So the decision has many different layers, but I felt I didn't want to be part of it; I wanted to leave that part of my life behind me at that point.

PlanetMosh: One thing I find depressing is how many people seem obsessed with championing their favorite singer as the "best" a band has had and criticizing the other singers. Rather than simply admitting that each singer is different and has their own strengths and weaknesses they constantly compare and criticize.

Olzon: When I joined NIGHTWISH, I had very big shoes to fill and they didn't make it easy for me, the fans. It was a hard job for me to take, because the fans didn't approve of me. We sold more albums than NIGHTWISH ever had in the past, so in that way, I succeeded, but they made me feel very insecure and that I had to work so hard to be liked because of those comparisons with [former NIGHTWISH singer] Tarja [Turunen], which I find quite amusing, because we are so different. I think music is something where you can't compete, I don't think you can say who is best because we are all different and what you like may be something I don't like and I think we should stop comparing. They are quite fanatical, some of these fans, and I don't know why NIGHTWISH have this type of fan, because I don't think all bands have them, but there's something about NIGHTWISH that made these people quite fanatical.

PlanetMosh: There is also the fact that different voices work well on different things. I'm not sure how well Tarja's beautiful soprano voice would work on some of the songs from "Imaginarum", for instance, whereas your voice worked for them.

Olzon: Yes, and my voice wouldn't suit those first songs from [the debut NIGHTWISH album] "Angels Fall First", and I had some difficulty singing those songs. I think what the boys did when they changed Tarja for a new singer, they wanted something new, a new sound, but at the same time, maybe if they had chosen someone similar, maybe it would have been easier for everyone in a way, but since the guys wanted a new style, that was the choice and the fans should maybe tried to have accept it a bit more, and many of them did, of course, but it was hard for us all in many ways.

PlanetMosh: With any band breakup, there are bad memories but also hopefully good ones too. What is one of your best memories from your time with NIGHTWISH?

Olzon: I think it was when we won a big award in Germany called the Echo award, which is like a Grammy. The evening was just fantastic, I was there on the same stage with celebrities like Kylie Minogue and FOO FIGHTERS, and we actually won the prize over WITHIN TEMPTATION and FOO FIGHTERS, which was just amazing, I couldn't believe it, so that was a really nice evening, just to be a part of that big occasion, and Germany's such a huge country, you know, so it was just wonderful, so I think that is one of the best memories I have.

Read the entire interview at PlanetMosh.