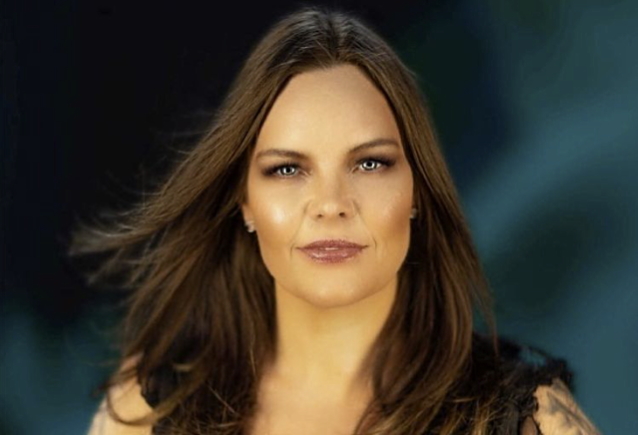 Anette Olzon says that she looks back on her time with NIGHTWISH with "mixed motions."

The Swedish-born singer originally joined NIGHTWISH in 2007 and recorded two studio LPs with the band before being dismissed in 2012 in the middle of the group's North American tour. She was replaced by former AFTER FOREVER frontwoman Floor Jansen.

Olzon reflected on her time with NIGHTWISH in a brand new interview with Finland's Chaoszine. Asked how she looks back on the entire five-year experience, she said (as transcribed by BLABBERMOUTH.NET): "Well, it's mixed emotions. It was a hell of a ride. You know how it was with the media in Finland. And for me, I didn't understand what was happening because I didn't know how big the band was, since I don't live in Finland. So it was really fun the first years with everything and also crazy. I wasn't home a lot. They did their heaviest touring when I joined. All of a sudden, they wanted to do so many long weeks [on the road]. I remember just that I had a five-year-old son [and] I came home after five weeks. I was home one week. I didn't almost have time to unpack my bags before I went off again for four weeks. So I don't remember everything, to be honest. There are so many things that I don't remember. And also, of course, the last years where it wasn't such a nice atmosphere between us. And I had my third child, and things happened.

"So I remember it both with really happy, happy feelings, but also with very, very negative and sad feelings," she explained. "But, of course, it was an amazing experience, and it was my dream that came true to be a full-time singer in an amazing big band. And they are a super-good band. So I bless the albums that we did and will always cherish that time, of course."

Not long after Olzon was fired from NIGHTWISH eight years ago, she claimed that an argument arose between her and NIGHTWISH when she asked for an Australian tour to be postponed during her pregnancy. Keyboardist Tuomas Holopainen suggested that Jansen should front the band on a temporary basis, but Olzon said no.

Anette explained in a 2014 interview: "I would have been too pregnant to go to Australia, so I wanted to push the dates back, but Tuomas didn't want that. Discussions about a substitute came up, and at first, I was, like, 'Yeah, well, okay.' But when they mentioned Floor, it was an automatic 'no' from me. I didn't think it was a good idea, because I knew what would happen — I knew the fans would love Floor, because she's a metal singer and I'm a pop singer, and I wanted to keep my job."

A year after NIGHTWISH fired Olzon, the band released a statement denying that she was dismissed because of pregnancy or illness. "We discovered her personality didn't fit this work community, and was even detrimental to it," the group said. NIGHTWISH went on to say that Anette was initially receptive to the idea of hiring a temporary replacement if she couldn't "manage everything," but that she later "took back her decision, and the difficulties really started. Fear of losing money and position seemed obvious." The band also insisted that "Anette and her company" were "paid a fifth of everything that was done during her time" with NIGHTWISH.

Anette's second solo album, "Strong", will be released on September 10 via Frontiers Music Srl. The follow-up to 2014's "Shine" is a harder and faster musical offering than the debut.

The music for "Strong" was written and composed together with acclaimed Swedish guitarist and producer Magnus Karlsson.

Since the end of her stint with NIGHTWISH, Olzon also formed THE DARK ELEMENT with former SONATA ARCTICA guitarist Jani Liimatainen. The group's self-titled debut album was released in 2017; a follow-up, "Songs The Night Sings", came out in November 2019.