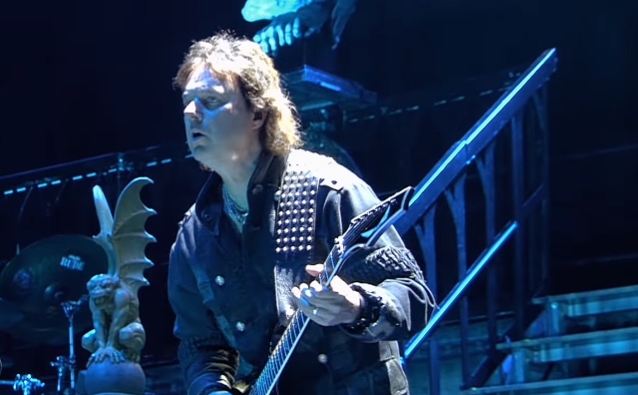 KING DIAMOND guitarist Andy La Rocque spoke to The Metal Voice about the progress of the songwriting sessions for the long-awaited follow-up to the band's 2007 "Give Me Your Soul... Please" album.

"It's probably gonna be two separate albums — not released in the same package," Andy said (hear audio below). "But the next album will be a continuation of the first one coming up."

Regarding the lyrical themes covered on the next KING DIAMOND album, Andy said: "To be honest with you, I don't really know too much about the story itself, [except for] the very few lines [King Diamond, the band's singer and namesake] told me so far. So that will be something to talk to King about, definitely. But all I know is it's gonna be a complete new story, of course, and it's gonna be about life and death and everything in between."

As for the musical direction of the new KING DIAMOND material, Andy said: "I would say, so far, from what I've been doing, it's getting back more towards the classical style of KING DIAMOND — more towards 'Abigail' or the first couple of albums, I would say. And I hope that the fans won't be disappointed over that."

La Rocque added that "it's impossible to say" when the new KING DIAMOND studio album will be released. "But I know that King has pretty much the full story in his head already," he said. "And then he has to write down all the specific lyrics, the details and everything, as soon as the music is done. So it's impossible to say, but we're doing the best we can to finish. So far, I have three songs, and I'm aiming at around five songs, and I think King is doing about the same — about five songs. So, we'll see. That doesn't mean it's gonna be 10 songs on the album. But we're working on it, definitely."

According to Andy, the first of the two new KING DIAMOND albums will be a standalone release, to be followed by the second part some time later.

Last April, King told Eddie Trunk's SiriusXM radio show that he had something special planned for KING DIAMOND's next album. "There's some very unique things I'm putting into it this time where you will relate to some of the sounds you hear on it, 'cause it's sounds that you will hear on certain days in your private life," he said. "You're outdoors, or whatever, and you might hear certain sounds and you will, guaranteed, think, if you heard the album, 'I wonder if that thing King talked about could have happened when I heard that sound here.'"

KING DIAMOND received a Grammy nomination in the "Best Metal Performance" category for the track "Never Ending Hill" off "Give Me Your Soul … Please".

The new KING DIAMOND DVD/Blu-ray, "Songs For The Dead Live", will be released on January 25 via Metal Blade Records.