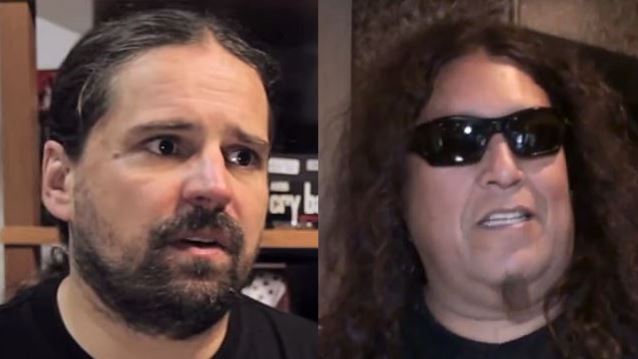 Guitarist Andreas Kisser of Brazilian/American metallers SEPULTURA was interviewed on the latest installment of HATEBREED frontman Jamey Jasta's official podcast, "The Jasta Show". You can now listen to the chat using the SoundCloud widget below. A few excerpts follow (transcribed by BLABBERMOUTH.NET).

On some of the well-known singers who tried out for SEPULTURA after Max Cavalera left the band in December 1996:

"[TESTAMENT's] Chuck Billy, he [laid down his vocals over] the [demo version of a then-new SEPULTURA song called] 'Choke' … Because we sent the instrumental [version] of a new song [to prospective singers to record their vocals over]. We didn't want anyone to sing 'Roots [Bloody Roots]' or 'Refuse/Resist', because we didn't want a clone. We wanted somebody to bring new ideas, to bring SEPULTURA to a different path, to a different level. And Chuck Billy, he did… He used more of the guttural [vocal style on his audition tape]. And it works. Because, recently, we did a 'Metal Allegiance' jam at NAMM in Los Angeles, and we played some SEPULTURA stuff with Chuck Billy singing, and it was great, man — it was great. So he did a great job. But, you know, he's Chuck Billy; he's TESTAMENT. We wanted somebody new."

[A two-minute snippet of Chuck Billy's SEPULTURA audition tape can be streamed in the YouTube clip below.]

"Dude, that was close, but… [Jorge] came down to Brazil. It was great. I mean, he's really a great singer [with] a great voice. But it's not only technical [things that you have to keep in mind], when you're looking for somebody to be in the band. I mean, you have to look for the whole package. You have to survive with this guy on the road, on the same bus, airports. I mean, [somebody who is] professional. You know — that kind of stuff. I'm not saying he was unprofessional, but he was very hyper. And we in SEPULTURA, we're very calm. It was insane, 'cause he was showing us his videos, and we were in the small room in the studio where we were practicing, and he was jumping from place to place; he couldn't stay in one place sitting down. And for us, it was a little bit [overwhelming]. [We were, like], 'Calm down, man.' [Laughs]"

On the hardships SEPULTURA faced immediately after the split with Max Cavalera:

"It is a propaganda type of feeling, because when Max left, I mean, I remember [the U.K. edition of] 'Headbanger's Ball' with [host] Vanessa [Warwick]. It happened at the same time where 'Headbanger's Ball' was playing, and then she read Max's letter [which he wrote from] a very victimized position, [claiming] that we were really the bad boys, and we had this conspiracy [against him]… that kind of stuff. We chose not to go and respond to everything he was saying, because time proved that every different interview [Max gave after that] was a different story, and it was very confusing, very chaotic. And we gave our version: we fired our manager, and our manager contracts were [about the expire]. We didn't have the choice to continue, like any other professional, with the contract that we had, and Max chose to leave. I mean, I think he didn't have any choice. I mean, he had a family and everything, and he had the proposition, really, to go ahead and do a solo career and everything. But that's what really happened. And we suffered a lot of the bombardment, from the press, from our own label that didn't believe in [current SEPULTURA singer] Derrick [Green]. They wanted another Max there — to continue the same type of… I mean, that's so stupid. That doesn't exist for SEPULTURA."