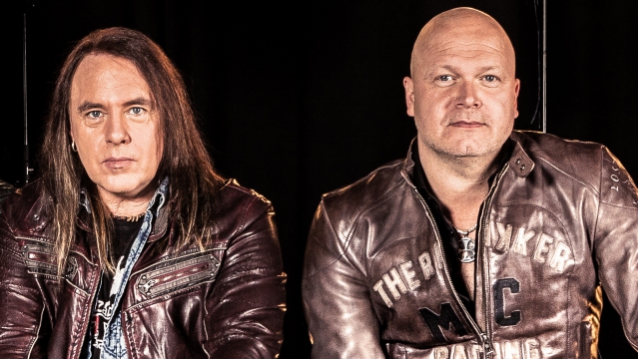 Tony Webster of the "Metal Command" radio show recently conducted an interview with frontman Andi Deris of veteran German power metallers HELLOWEEN. You can listen to the entire chat via the SoundCloud widget below. A few excerpts follow (transcribed by BLABBERMOUTH.NET).

On the personal chemistry that existed during HELLOWEEN's recently completed "Pumpkins United" tour, which saw the band reunite with vocalist Michael Kiske and guitarist Kai Hansen:

Andi: "When you have such a great start [to the tour], you don't need to worry about anything. The next concert will be a great party again. It's just so easy to go onstage and have a good time. That's what it's all about. That's why you go onstage in the first place. What else could you ask from life to see people singing along to your own songs and having fun and having smiles on their faces through nearly three hours of shows? Yeah, we're now back from the tour. I think the last show was 22nd of December last year. When I checked with the boys, everybody is still in awe, so to say. 'Wow, what a great, great, great year.' Probably the best year for everybody ever in the whole 30-plus[-year] career that we already have."

On sharing the stage with Kiske, whom he replaced in 1994:

Andi: "It's a bit strange, but for me, it suddenly was the most normal thing to do, going onstage with Michael. After two or three shows, it was just, like, 'Wow!' I welcomed it and I really appreciated not being the only singer because when Michael sings, I can smoke a cigarette. [Laughs] Then Michael, when he realizes, okay, it would be great to have a little break for his voice, he has his break, then I go on singing. For the singers, it was probably super comfortable because we share the job. You have to see poor Dani [Löble] on the drums, for example, constantly playing, not the real easy stuff, I have to say, if you know our music, you know nearly three hours of war is going on with the drums. This is a guy, actually, we should talk about, not about Michael and myself. We just had a great time. I think the most important thing was that I invited him before the world tour, I invited him onto my island [in Tenerife, Spain]. We had two weeks and we got to know each other really well privately. He loves the island. I love Michael and I think he loves me. I may say that because I have a son and I'm married for over 30 years. [Laughs] Yeah, it just felt like he's coming home. Honestly, he was coming home. For me, it's a big relief because I don't need to sing these super-demanding songs of Michael Kiske anymore because there is a Michael Kiske who can sing his own songs. For me, it's perfect. The chemistry works for any reason; there's no secret behind it. It fits [or] it doesn't fit and, in this case, it fits."

On whether HELLOWEEN will release a live album to commemorate the "Pumpkins United" tour:

Andi: "That was a big discussion because do you just put out a stupid live album as we have done before? So, I think we agreed now we do a nice collection of several great concerts, like Madrid, for example, was unforgettable, or São Paulo was unforgettable. Wacken is the biggest metal festival in the world; it was such a great experience to headline the biggest metal festival in the world. Wow! We decided to make a compilation and I think that's been agreed on that's what Charlie [Bauerfeind], our producer, is just in the moment finishing. I can't tell you — I haven't seen it. [Laughs] I've only seen bits and pieces directly after the concert, for example, Madrid, we had two or three hours after the show, we had five minutes that we watched parts of the show and we were completely fascinated because the people were going apeshit there and everything was great. Because you don't have only one memory of one certain show, but there are several memories of several great shows. Why not do a mixture of these highlights? I think that's what we're going to do now."

On whether Hansen and Kiske will be a part of HELLOWEEN's next studio album:

Andi: "Absolutely. I have two songs new, which I'm quite confident that the boys will like. Both of them are actually written for Michael and myself, kind of a duet, whereas Kai, for example, he's always great to have for the shouter parts or stuff like that. Everybody knows I'm a big KISS fan, so this is something I always thought the strength of KISS is having Gene Simmons, Paul Stanley and even Peter Criss back in the day, who could sing. They wrote songs for three singers sometimes. I really enjoyed that. This is something I'm looking forward to for the next album, too, that there are least two songs or maybe three where you have two or three singers. I like that. I love it."

On his songwriting approach now that he's composing with Kiske in mind:

Andi: "Normally, I sit down and write a track always with the stage in the back of my mind: 'Can I do that live? Can I do that?' The problem is that I love to sing rock and roll, so out of the stomach, really shouting and crying and yelling. I love that. The problem is that when you shout and yell and really do that rock and roll, most of the time, you damage your vocals in the higher level, like the technique, the high-pitched vocal technique is gone most of the time when you shout and yell before that. I always had to write songs with that in the back of my mind. You cannot make a brutal verse where you shout like a maniac, then there's the next refrain with a high-pitched technical vocal. It doesn't work like that. Now with Michael in the band, I could easily write songs where I yell and shout the shit out of myself because I know the refrain will be sung by Michael. This is kind of a new freedom in songwriting. Vice versa, you could have a super-clean, romantic, flying vocal line sung by Michael, then you would have that brutal anti-social refrain, which I could sing or Kai could sing. There are new ways of songwriting, definitely. I enjoy it."

The "Pumpkins United" tour marked the first time Kiske played live with HELLOWEEN since 1993. Hansen, who departed HELLOWEEN in 1988, has been joining the band onstage on various tours and festival appearances throughout the years. The set featured several duets with Kiske and Deris, along with many rarely played songs, including "Kids Of The Century", "Rise And Fall" and "Livin' Ain't No Crime". Hansen — who fronted HELLOWEEN until late 1986 — sang a medley of several early HELLOWEEN classics, including "Ride The Sky", "Judas", "Starlight" and "Heavy Metal (Is The Law)".

The reunited HELLOWEEN has captured "the very best moments" from its ongoing "Pumpkins United" world tour and will make the footage and recordings available as a live CD as well as on DVD and Blu-ray in 2019. In addition, there will be a brand-new HELLOWEEN studio album featuring Kiske and Hansen. The band's songwriting trio of Michael Weikath, Hansen and Deris will retreat to the studio in 2019 to begin work on the disc, which is scheduled to arrive in 2020 via Nuclear Blast.