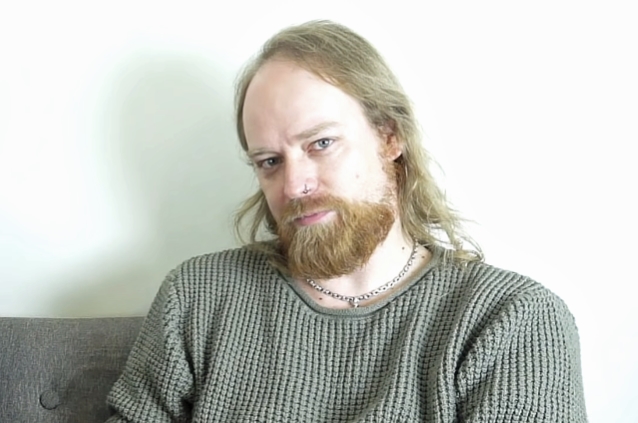 France's Loud TV recently spoke with BLOODBATH members Nick Holmes (also of PARADISE LOST) and Anders Nyström (also of KATATONIA). The full conversation can be seen below. A few excerpts follow (as transcribed by BLABBERMOUTH.NET).

On the group's recent European tour with HATEBREED, DIMMU BORGIR and KREATOR:

Nick: "It's fun to do it. This is the first tour we've done. We usually do the festivals, but it's like more of that, really, but it's just every day. Of course it's fun to do, and it's nice to play to lots of people as well."

On whether BLOODBATH should be considered a "full-time band" now that KATATONIA is on hiatus:

Anders: "No, it's not as easy as that — it's not as black-and-white as that. We don't want to know what's going to happen with KATATONIA right now. It's not really our concern now when we're on tour with BLOODBATH. We try to do each thing at a time, and we're having really fun doing this. This was planned a long time ahead, so we're happy to fulfill this tour. As Nick said, this is the first time we do it — it's an experiment, and it's turning out great. It's death metal for half an hour each day — pretty much what I like. A perfect proportion."

On how the band members approach BLOODBATH:

Anders: "We like to do things professionally, but it doesn't mean things have to be boring. We like to entertain ourselves [and] the audience, and have fun while doing it. Death metal, that goes way back for all of us, back to our teens. That was the music we enjoyed. It's something that sticks with you [and] will never really go away. It's kind of cool to revisit that again, and that's a lot of fun to do that."

On the old-school sound the group favors:

Anders: "We're just obsessed about that sound, really. It's all about the Sunlight studio, that school, Tomas Skogsberg, the HM-2 Boss [Heavy] Metal [effects] pedal... all that thing is just such a legendary, classic sound. When we really worshiped death metal, you had two divided scenes — the American scene and the European scene. Of course, you had great bands in Germany, Holland [and] the U.K. as well, but the Swedish scene was really focused on that sound at the time, and it's just something that's so special. We like to represent it these days. Twenty years ago, 1998, when we did start BLOODBATH, there was nobody doing that anymore, having that sound, really. We just kept waving that flag."

Nick: "I remember when I listened to death metal, the underground bands before they were on vinyl, when ENTOMBED were called NIHILIST, always the best-sounding demos were the Swedish bands. They always sounded the best. That had that really kind of... the pedal did a hell of a lot for it, but I always looked forward to the Swedish bands, because they just sounded better. They just had that sound."

Nick: "If you start singing about the undead, you can't really talk about the lyrics that much, really. It's not that you're going to go in depth about the undead [laughs]. It's kind of what you see is what you get. It's like, 'Can you do a track-by-track breakdown?' 'Well, this one's about zombies. What [else] can I say?'... The topics all tick the boxes for this genre of music, and it fits it perfectly. You can have a lot of fun with it as well."

Anders: "I had a blast writing the lyrics. It's fun. It's all death metal — there's no boundaries; there's no rules; you can do whatever you want with it. Basically, for me, it just comes down to entertainment. If you put a horror flick on the TV, you do it for your own entertainment. Same with BLOODBATH. That's how I see it. Of course, you have the power to put a message through it and everything, but I wouldn't really focus on doing that through death metal."

On the artwork for the group's latest album, "The Arrow Of Satan Is Drawn":

Anders: "It's a guy called Eliran Kantor. We more or less gave him the title and wanted him to come up with a concept for the artwork — like, a visual representation. I think it's magnificent. It kind of needs to grow on you a little bit, maybe, because it's very different artwork for a death metal band. It definitely stands out, but we [prefer] standing out than just a planned, standard thing you forget about in the bin immediately. It definitely worked out great. I think it's horrifying, the artwork, actually — it's really uncomfortable."

Nick: "It's beautiful yet hideous."

On whether the group plans to tour more in the future:

Anders: "It's up in the air. We'll see how this tour, what it does to us, I guess. But yeah, there will be more live action for sure, in different shapes and forms."

On the future of KATATONIA:

Anders: "It's too early to say anything about that yet. We'll have to see next year what we sort out. There's a lot of things to be solved, and we want to do it from the ground up. It might sound dramatic, but you've got to do it right or otherwise, you'll regret it later. We've been keeping on for such a long time now that you've got to really be concerned about the next step and make sure you still have the right vibe in the band, and the will to carry on."

BLOODBATH's fifth album, "The Arrow Of Satan Is Drawn", was released on October 26 via Peaceville. The record – the group's second with Holmes — was recorded with Karl Daniel Liden at Ghost Ward, City Of Glass and Tri-Lamb Studios.