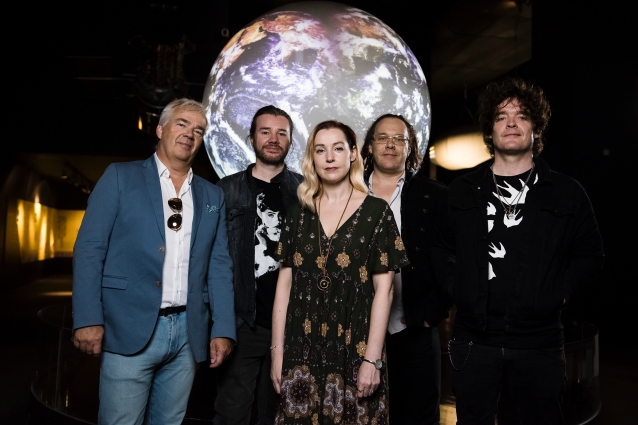 Mascot Label Group has announced the signing of ANATHEMA.

The award-winning alternative rock masters have released 11 studio albums of fearless and uncompromising beauty. Ever since their debut, "Serenades", in 1993, they've refused to be pigeonholed and have continuously evolved; all the way up to their most recent studio album, 2017's conceptual masterstroke "The Optimist", which revealed some of the darkest, most challenging music they ever put their name to, as well as a series of live albums and compilations.

Led by brothers Daniel (vocals, guitar, keys) and Vincent Cavanagh (guitar, keys, vocals) along with John Douglas (percussion), Lee Douglas (vocals) and Daniel Cardoso (drums), ANATHEMA will be heading into the studio in 2020 to work on a new album.

ANATHEMA will perform a special one-off set at Space Rocks at the Indigo at the O2, London on Saturday, September 21 titled "The Space Between Us". They will be using unique visual imagery from the European Space Agency (ESA) in collaboration with multimedia artists Kristina Pulejkova. The set promises to be a musical and visual extravaganza. The event will also feature Tim Peake (ESA astronaut), Shahrzad Timman (robot engineer), Suzie Imber (solar system explorer) and Lucy Hawking (author) amongst others as well as music from ANATHEMA, AMPLIFIER, VOYAGER and Anna Phoebe.

To mark this occasion, the band descended on the Science Museum, London to sign the contract with Mascot Label Group CEO, Ed van Zijl in front of ESA's Structural Thermal Model of the BepiColombi, which is currently on a seven-year journey to Mercury, in one of the most challenging planetary missions ever launched.

Talking about the signing to the label, Ed van Zijl says: "One of the great innovative British rock bands! Over the years they have been able to progress musically, artistically and naturally into the future as only the strong ones can. I am very excited to have the band now join the MLG family and taking the next step together with us."

ANATHEMA manager Andy Farrow of Northern Music Company said: "After nine years and four albums with Kscope, whom I would like to personally thank for all their work on the band, when the band came on to the market again, I received quite a lot of offers, of which we whittled down to labels we were going to take a meeting with. I found that Ed and his team at Mascot had a very refreshing outlook to releasing albums and building bands. I had previously met the people in the U.K., Dutch and NYC offices when they were pitching for another of my acts and remember being very impressed by them and I'm delighted to be working with them on ANATHEMA's next release in 2020.”

Danny Cavanagh said: "We are all extremely excited to announce our new contract with Mascot Label Group. This is the beginning of a new adventure for us and we are looking forward to a wonderful partnership with Mascot in the coming years. I would particularly like to pay tribute to Kscope for their unwavering support and great work over more than a decade. They've been a big part of our lives and we say thank you very much to all the staff there. Of course, we owe a debt of gratitude to Andy Farrow, Jasper at Northern Music Company for excellence in management and guidance. Last but not least, a huge thanks to the fans, without whom, none of this is possible."

Vincent Cavanagh also spoke about the signing, saying: "I'd like to give my thanks and respect to everyone at Kscope who we have had the pleasure of working with for the last nine years. They always gave us complete creative freedom and always supported everything we wanted to do as a band. They're great people and a lot of fun to work with. Looking forward to the next adventures with the guys at Mascot."