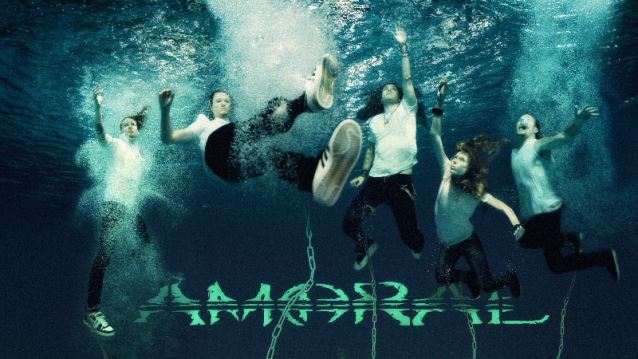 "If Not Here, Where?", a brand new song from Finnish metallers AMORAL, can be streamed below. The track comes off the band's upcoming album "Fallen Leaves & Dead Sparrows", which will be released in early 2014.

"'Fallen Leaves & Dead Sparrows' is a concept album, and 'If Not Here, Where?' sits right in the middle of the album and the story, marking a turning point in the protagonist's journey," says Ben Varon, guitarist and main songwriter of AMORAL.

"We wanted the first taster to really represent the whole album. Also, 'If Not Here, Where?' being such a massive chunk of music, almost like two songs in one, it will take some time for listeners to digest it all, and hopefully this track will keep people occupied until we leak out another song."

AMORAL's fifth album, "Beneath", entered the official chart in Finland at position No. 30. Released on October 26, 2011, the CD came equipped with a stunning 18-page poster booklet (made by Spanish artist Marta Nael), expanding the cover artwork into all its glory.