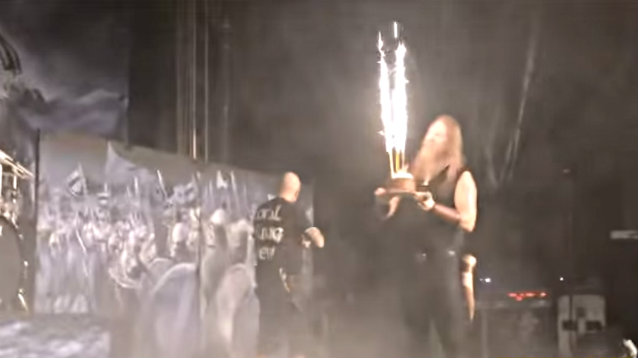 According to Maximum Rock, vocalist Johan Hegg of Swedish death metallers AMON AMARTH celebrated his 41st birthday on stage at the band's concert in Bucharest, Romania. The organizers of the gig prepared an amazing surprise for Johan and, with the help of the singer's bandmates, stopped the show in order to bring Johan a chocolate cake, "accesorized" with flames, in a true metal tradition. However, at the suggestion of his mates, a "Hello Kitty" candle was added to the desert, just to give the band members the chance to have a little fun on the tough musician's behalf. Nelu Brindusan, the Romanian promoter of the concert, climbed on stage and gave Johan his treat, along with a bottle of champagne, which the musician opened, much to the delight of the audience that got showered with its foamy waves. In the meanwhile, the fans were singing "Happy Birthday" to an excited Johan, who declared: "What a great way to spend your birthday!" After thanking everyone and promising to eat the cake later, Johan resumed the show and delivered a spectacular performance.

Fan-filmed video footage of the cake presentation can be seen below.

AMON AMARTH's ninth studio album, "Deceiver Of The Gods", sold around 17,000 copies in the United States in its first week of release to land at position No. 19 on The Billboard 200 chart. The record arrived in stores on June 25, 2013 via Metal Blade Records.