AMON AMARTH comments: "We are having so much fun on our current European tour we decided we needed to come back and to do it again! We are definitely looking forward to playing some new places. This time we will continue the fun and lay waste to the Netherlands, Germany, Italy, Austria, France and Spain with DARK TRANQUILLITY and OMNIUM GATHERUM. The shows will be fantastic, beer soaked nights of heavy metal. We look forward to seeing our crazy berserker fans, and we warn you to get ready to fight, pillage and raise your horns!"

DARK TRANQUILLITY adds: "We're thrilled to announce that we'll bring 'Atoma' to the European stages early next year. We have the honour of being the main support to our countrymen in AMON AMARTH on their upcoming trek. Horns up!"

AMON AMARTH recently announced the addition of Jocke Wallgren as the band's new permanent drummer. Jocke has been sitting behind the kit for all shows on the group's current "Jomsviking" world tour.

In an interview with EMP Rock Invasion, AMON AMARTH vocalist Johan Hegg stated about the departure of drummer Fredrik Andersson and AMON AMARTH's decision to enlist a session drummer, Tobias Gustafsson (VOMITORY, CUT UP), during the recording sessions for "Jomsviking": "Tobias was helping to write the album and record the album. We asked him to help us write and record the album, 'cause we didn't wanna go out and find a complete replacement, start working on a new album and then realize halfway through that, 'All right. This is not working out. We need to find someone else.' That wouldn't have been good at all. So we decided to work with someone we know really well. Tobias is an old friend and a great drummer. I mean, he's been playing for years in VOMITORY and now, obviously, he's in CUT UP. I think he contributed a lot to the end result of the album. I think it would not have turned out as great as it did without him."

"Jomsviking" was released on March 25 via Metal Blade in North America and Sony Music internationally. The first concept record in AMON AMARTH's storied career tells a tragic tale of love and revenge, backed by the Swedes' trademark melodic, anthemic metal, which was produced and mixed once again by Andy Sneap (MEGADETH, TESTAMENT, ACCEPT). The epic original story is set in the world of the Jomsvikings, the legendary order of mercenary Vikings. 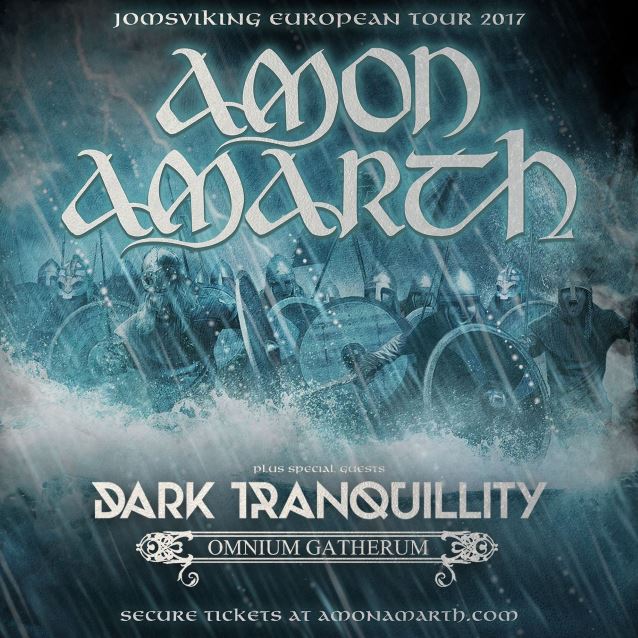