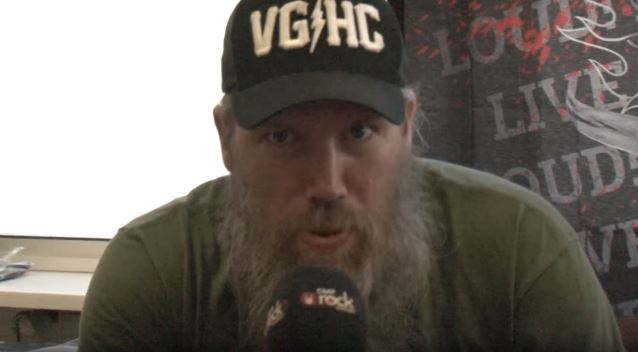 Speaking about the departure of drummer Fredrik Andersson and AMON AMARTH's decision to enlist a session drummer, Tobias Gustafsson (VOMITORY, CUT UP), during the recording sessions for the band's new album, "Jomsviking", Hegg said: "Tobias was helping to write the album and record the album. We asked him to help us write and record the album, 'cause we didn't wanna go out and find a complete replacement, start working on a new album and then realize halfway through that, 'All right. This is not working out. We need to find someone else.' That wouldn't have been good at all. So we decided to work with someone we know really well. Tobias is an old friend and a great drummer. I mean, he's been playing for years in VOMITORY and now, obviously, he's in CUT UP. I think he contributed a lot to the end result of the album. I think it would not have turned out as great as it did without him. But right now, for the upcoming tours, we're working with a guy called Joakim Wallgren (OCTOBER TIDE, VALKYRJA). We're gonna do a U.S. tour and the summer festivals with him. And then we'll see. If he wants to continue working with us and everything works out fine…"

According to Hegg, AMON AMARTH is in no rush to make a decision regarding who will sit behind the kit for the band on a more permanent basis. "To be fair to anyone, you need to give them a real chance to grow into it, 'cause it is a tough lifestyle and it can be very aggravating," he explained. "You have to make sure that you feel you get along really well and it's the right guy. I have a good feeling about Jocke, but maybe down the road, he'll grow tired of us. Who knows? [Laughs]"

"Jomsviking" was released on March 25 via Metal Blade in North America and Sony Music internationally.

AMON AMARTH's previous album, "Deceiver Of The Gods", sold around 17,000 copies in the United States in its first week of release to land at position No. 19 on The Billboard 200 chart.