Swedish metallers AMON AMARTH are being advertised as the opening act on the November 12, 2008 "The Unholy Alliance: Chapter III" concert at the Sportpaleis/Lotto Arena in Antwerp, Belgium alongside the previously announced bands SLAYER, TRIVIUM and MASTODON. Although no official announcement has yet been made regarding AMON AMARTH's involvement with the tour, they are expected to be revealed as the fourth band to take part in the trek, which will kick off late October.

So far the following dates have been announced for the tour: 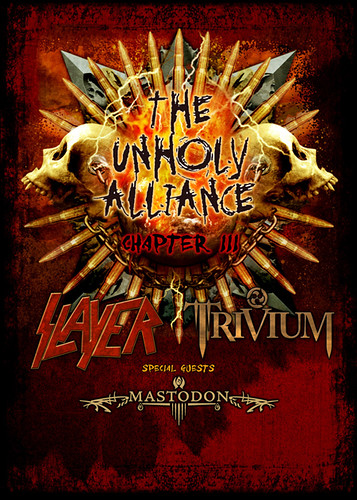 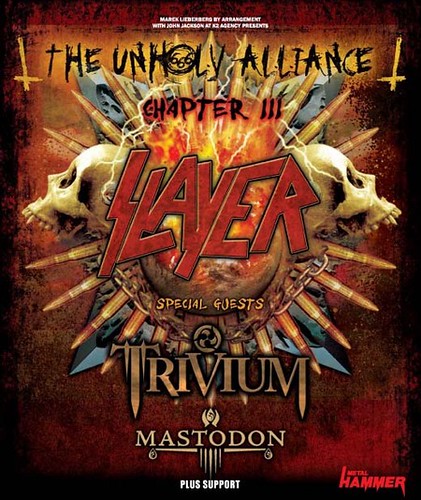 AMON AMARTH has set "Twilight of the Thundergod" as the title of its seventh full-length album, due this fall via Metal Blade Records. The CD title was revealed by AMON AMARTH frontman Johan Hegg during an interview with the "Tinitus" radio show, which airs on Norway's P3.

"Twilight of the Thundergod" was recorded at Fascination Street Studio in rebro, Sweden and will include such songtitles as "Guardians of Asgaard", "Live for the Kill" and "Tattered Banners and Bloody Flags".

AMON AMARTH will play four shows at Zeche in Bochum, Germany in late December under the banner "Bloodshed Over Bochum". The band will play one of the first four albums in its entirety each night along with a "best-of" mix from "Fate Of Norns" (2004), "With Oden On Our Side" (2006) and the upcoming album.

The shows will also include:

As previously reported, AMON AMARTH will embark on a North American headlining tour in October. Support on the trek will come from the Tampa melodic trash outfit THE ABSENCE.