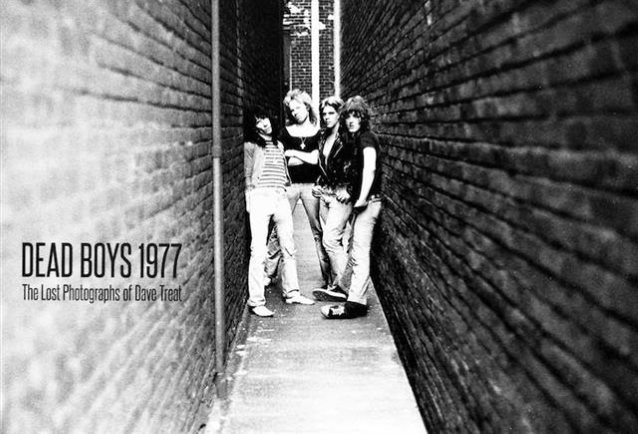 Just in time for the fortieth anniversary of the seminal punk album "Young Loud And Snotty", early photographs of the DEAD BOYS, one of America's most important punk bands, will be released in a book titled "Dead Boys 1977: The Lost Photographs Of Dave Treat". Edited and designed by Ron Kretsch (Dangerous Minds), with introductions by both Kretsch and curator Brittany M. Hudak, the book hits streets on September 29 to coincide with DEAD BOYS guitarist Cheetah Chrome's national fall tour.

Photos contained in this book reveal "the embryonic DEAD BOYS cavorting in the rust belt ruins of mid-1970s Cleveland, before CBGB, before 'Young Loud And Snotty', before lasting infamy." This collection of photos chronicles not only Stiv Bators, Cheetah Chrome, Jimmy Zero and Johnny Blitz "on the cusp of greatness, but also offers a compelling view of an industrial city on the cusp of dying." (Quotes are from Kretsch's introduction, which also explains "the images were at long last exhumed by Treat in 2015 for exhibits. Other than by those shows' attendees, many of these photos have never been seen by the public. The book also contains an intimate and uncommonly sensitive portrait session with Bators, and a section of never before seen color photos of the DEAD BOYS opening for THE DICTATORS.")

Bringing each photo to life is the colorful commentary of Cheetah Chrome and Johnny Blitz, giving personal recollections of the photo shoot, Cleveland, the beginnings of punk rock, and their friend and bandmate the late Stiv Bators.

The book's cover features a photo many will seem to recognize as the cover of "Young Loud And Snotty" as shot by Glenn Brown. Dave Treat explains "After the DEAD BOYS were signed with Sire Records, the band wanted the photo I shot [the alley shot] to be used as the album cover. They wanted me to reshoot the photo…and they pushed hard for me, but [Sire owner] Seymour Stein had the final say. He decided since I was not a professional photographer, he wanted Glen Brown to shoot it. So he flew Glen out to Cleveland and they went back to the exact location and reshot my photo. How do I feel about that? Actually, it's great to finally be recognized as the person who created the original concept and photo. As far as Glen, he was hired to do a job and no hard feelings here."

Last year, Dangerous Minds ran a feature story on one of the exhibits of these photos, penned by Kretsch, who explained: "The negatives for these amazing photos were buried in a closet for almost forty years, and most have been printed for the first time this year by [Bryon] Miller, a gallery proprietor and photographer for High Times and Billboard, who, out of respect for their origins and provenance, actually printed them old-school gelatin silver style. In an actual darkroom." That feature story basically begat this book.

Photo exhibitions are planned for Cleveland, New York and Los Angeles in the fall, with more cities and details to be revealed in coming weeks.