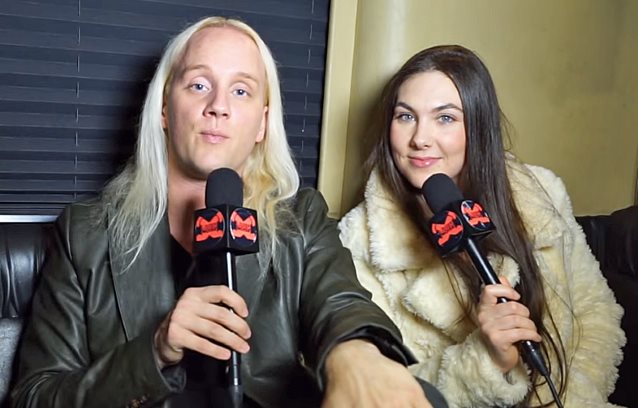 Singer Elize Ryd and guitarist Olof Mörck of Swedish metallers AMARANTHE recently spoke to Louder Noise about the band's new B-sides collection "Breaking Point", Elize's ballet skills in the "True" music video, and the status of their next album.

Speaking about AMARANTHE's upcoming follow-up to 2014's "Massive Addictive" album, Olof said: "As soon as we're done with something, we start to figure out the next level, when it comes to the live show and for the next record and that whole thing. So, absolutely, as soon as we stopped and we finished 'Massive Addictive', we started to plan the next album. So it's gonna be… It's definitely gonna be next year. I'm always a little bit careful about saying too much, because if something gets pushed back, then everyone can become really disappointed. But in terms of the release windows and how often we have releases, for us, we're not really forcing anything; it's more the opposite. We're always trying to hold back. And when we started to write for the upcoming album, it was almost a year of not writing any music. So we're really, really excited to be working on that right now."

AMARANTHE has just returned to the U.S. on an epic headline tour with BUTCHER BABIES in tow.