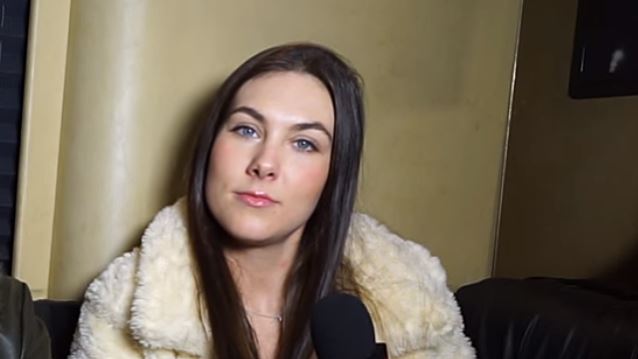 Metal Temple's Daniel Fox recently conducted an interview with singer Elize Ryd of Swedish melodic metallers AMARANTHE. You can now listen to the chat in the YouTube clip below. A couple of excerpts follow (transcribed by BLABBERMOUTH.NET).

On the AMARANTHE sound constantly evolving and changing:

Elize: "Since we have so much inspiration and different angles that we have followed always and kind of mixed together, we always feel like we are pretty unlimited as a band and songwriters, which makes us kind of… I mean, we almost freak out when we get the chance to write a new album, because we feel like, 'Okay, we can take this anywhere.' And we are very eager always to put in new influences into the music, because we believe that… I mean, it's both fun for us, but also for the listeners. So that's why we — again — decided to bring in refreshment and new thinking — I mean, for us as a band, and to show that we are not getting stuck and we are not out of any ideas. And this is how we would love to keep it, if it's possible, for the future as well, to develop in that direction. We wanted to make [this album] more diverse than the previous ones, because we… the only critique we got so far… We got, of course, critique, and you should not always listen to it, but it's been always something that the songs sound the same, some of them, and that they didn't know that, or think that, we could develop with that kind of concept as a band. So that's also what kind of triggered us to develop even more, and always bring in something new and fresh for all the albums."

On the stronger "electronic" influence on the new AMARANTHE album, "Maximalism", compared to previous efforts:

Elize: "Yes, we thought since we have these elements in the music, like electronic instruments, and that's the reason for the title also — 'maximalism' is the opposite of 'minimalism,' so we thought that if we maximize ourselves as human beings, and maximize the sound and maximize the influences inside the band, that's what we focused on for this album, and therefore the name 'Maximalism'. So we thought that, for the song 'Limitless', it would be a cool and different thing to just stick to the electronic vibes in the beginning and then we bring in the rock and metal for the second chorus."

On the individual voices of the three singers in AMARANTHE being more prominent on "Maximalism" as opposed to the massive harmonies which characterized the band's earlier efforts:

Elize: "That was actually not [a] conscious [effort]. I think that… now when I listen to it, I believe that the harmonies are just in a lower mix than they used to be. And maybe it's something that happened to our ears, that we can hear them very clear… 'Cause I thought about it. I even asked, before we did the final mix, to the producer to raise the harmonies… I mean, to put them higher [in the mix], because I love harmonies, and the harmonies are really good on this album too. But yes, it's unconscious, and they are in a lower volume. Maybe if you listen on other speakers, you can hear them better. I don't know. [Laughs]"

"Maximalism" is due out October 21 on Spinefarm Records. The CD was produced once again by Jacob Hansen (VOLBEAT, EPICA, DELAIN) and mastered by Svante Forsback (RAMMSTEIN, APOCALYPTICA, DRAGONFORCE).