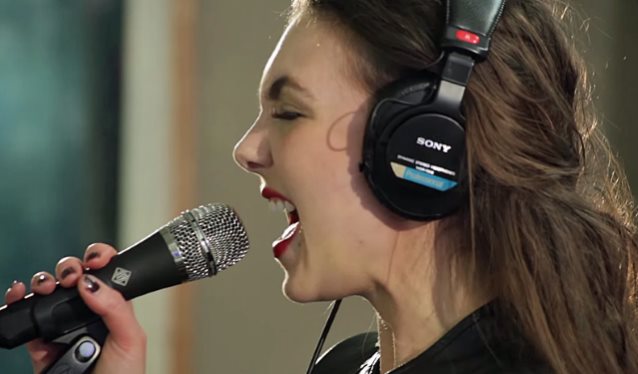 Swedish metallers AMARANTHE recently took part in an acoustic performance at the studios of SiriusXM's Octane. You can now watch video footage of their appearance below.

AMARANTHE's third album, "Massive Addictive", was released on October 21, 2014 via Spinefarm Records. The CD was tracked at Hansen Studios in Ribe, Denmark with producer Jacob Hansen (VOLBEAT, EPICA) at the helm.

In a recent interview with The Grim Tower, AMARANTHE drummer Morten Løwe Sørensen stated about "Massive Addictive": "While other songs are more metal than anything else we have done, it's not as fast paced as our previous two albums, and a bit more groovy. Every song is distinctively different from the others, but it's not a concept album this time like on previous albums. Somehow I almost see the two first albums as part of a whole, while 'Massive Addictive' is a step in a little bit of a different direction maybe… You can easily hear that this is AMARANTHE, but it does contain new elements and a different approach than our earlier material."

Regarding the songwriting and recording process for "Massive Addictive", Morten said: "We recorded with producer Jacob Hansen, as we have on our previous albums, but we wanted a bit of a different production this time. The songs this time leave more room for everything to be heard, since it's not quite as hectic as before. So we could go for a bigger and more open sound. Everything went pretty smooth, actually, even though we had been touring all the time and actually had to write a big part of the album either on the road or in the studio while recording. We had a pretty clear vision of how we wanted the album to turn out, but also left room for a lot of creativity in the moment. All in all, it has been a pretty rewarding experience this time."